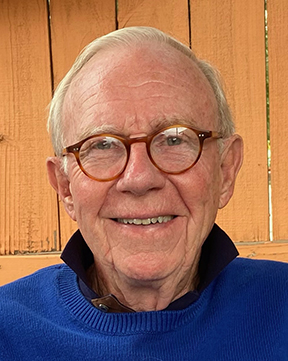 My first “defining moment” was in fifth grade at the age of 10 when our class was ordered to write a “composition” for the intimidating principal. I wrote an essay describing my grandfather’s face; he was visiting from out of town, and I loved him dearly. When the principal returned with our essays, she announced that mine was exceptional. I was stunned but pleased as heads swiveled toward me, a new kid at the school. From that experience I learned that writing well had certain rewards — positive feedback and recognition.

In high school, I became sports editor of our school newspaper. I was issued a field pass to watch the football games from the sidelines instead of from the bleachers. It was exciting to see the plays unfold up close. I learned in those defining moments that being a reporter could give you “access” – a close-up, personal view of important, even historic, events.

In my junior year at Northwestern University’s Medill School of Journalism, I was a struggling student, except in my journalism classes. In the required Reporting I class, I was unexpectedly cited for a paper I’d submitted. NU’s Homecoming Queen, a classmate, approached me later and congratulated me. Could it be that journalists also “get the girl”? Or at least her attention? A sexist notion today perhaps, but not for a hopeful 20-year-old in 1965.

Although I majored in broadcasting, my first job was in the Sunday features department of a newspaper, Chicago’s American, an afternoon daily owned by the Chicago Tribune. The city had two morning and two evening papers in 1968.

I worked my way through the ranks – Sunday features, city desk, general assignment, “rewrite” desk, politics, and the State Legislature in Springfield. The latter was a hoot, covering all the rogues and rascals from urban wards and downstate Illinois farm country struggling for advantageous legislation. The “big shot” reporters from Chicago sat in the press gallery in the front of the House and Senate chambers, choice seats from which to watch the goings-on, even though much of the dealing was off the floors. 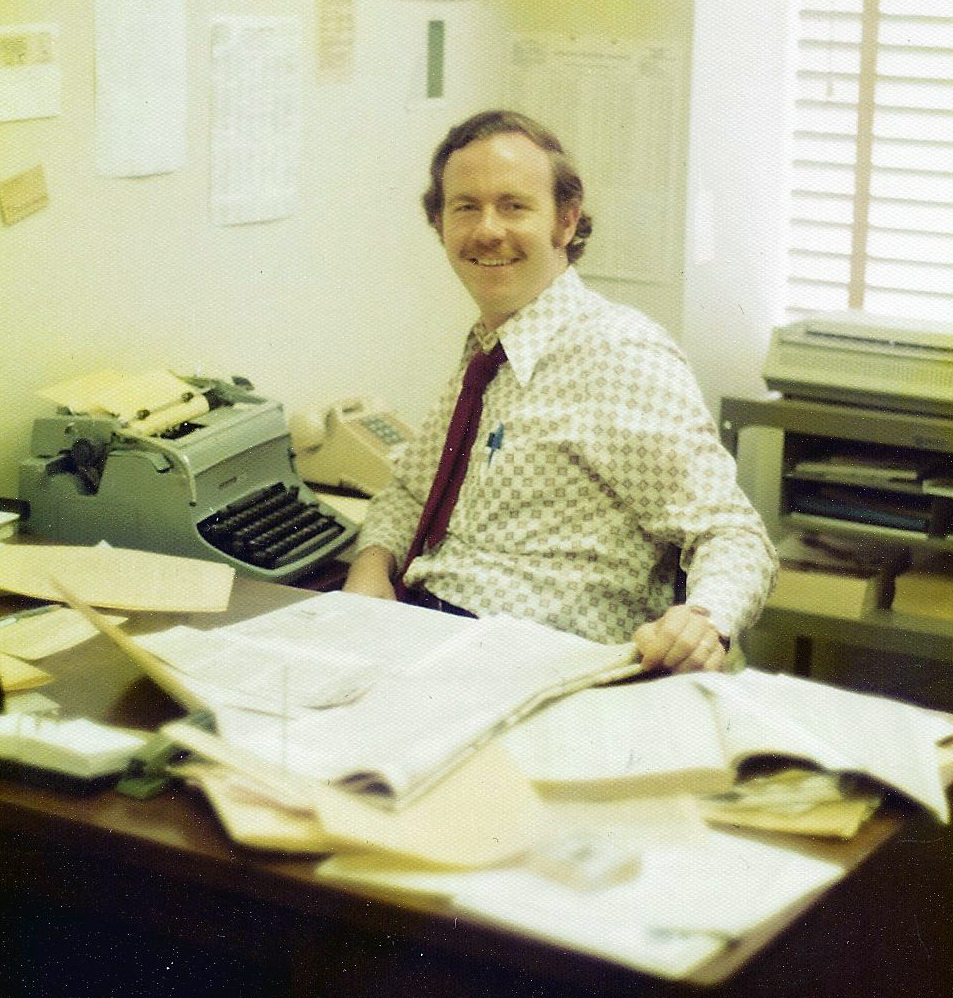 In 1974 Gregg was the one-person Washington, D.C., bureau for Chicago Today

From the state capital I was promoted to the nation’s Capital – the one-man Washington bureau for Chicago Today (the American’s successor paper, now a tabloid instead of a broadsheet) in 1973.

I parachuted right into the middle of the Senate Watergate hearings, with an assigned press table seat right over the witnesses’ shoulder, often visible on live television. Transitioning from local to national politics all by my lonesome was discouraging at times. I had no sources; no one on the Watergate committee was from Illinois. Woodward and Bernstein were scooping the world while I was relegated to “color” and sidebar stories. Still, I was at the center of the news universe at the ripe old age of 27. I’ve often said my career may have peaked then.

Watergate led to the Nixon impeachment hearings in the House, which I also covered in person, still bereft of accommodating sources. And I stood on the South Lawn of the White House on that August day in 1974 when the President climbed the stairs to Marine One, turned and waved his hands in what I’ve since called the “V for victim” sign as Jerry and Betty Ford waved goodbye.

A month later my newspaper folded, a victim of advertising dollars fleeing to television evening news. Now there was a defining moment – newspapers were on the way out.

After a stint at the parent Chicago Tribune in its Washington bureau I was “asked” to return to the home office. By then I had an acute case of Potomac fever, so I stayed.

A day after my release, I was hired by Television News Incorporated, known as TVN. It was a syndication news service started in 1972 by the conservative beer baron, Joe Coors. Well-known for his political leanings, Coors thought he could create an “alternative” to the three mainstream commercial television networks he thought were being unfair to Nixon.

The head of TVN was a New York political operative named Roger Ailes, who would eventually find fame and infamy as the head of Fox News. I became the Washington content producer for TVN, and I must say Ailes never changed or challenged our output. We ran a hard news operation until Coors pulled the plug in 1975, a year after I joined. Out of work again.

A side note: Coors and Ailes could have become Ted Turner or Rupert Murdoch as early as the late 70s had Coors continued to fund the operation. We shot our news stories on 16 mm film and fed it electronically to TV stations around the country on Telco (telephone company) lines. A year later, the industry switched to videotape, electronic journalism, and began to feed news stories via satellite. Cable television exploded; Ted Turner created CNN. The industry was forever changed.

In 1978, I found work at public television, the Public Broadcasting Service (PBS). That  defining moment influenced the arc of my career for the next 26 years.

In 1981, I created a local program on WETA, the PBS station, called “The Lawmakers,” a weekly magazine show that took advantage of the television cameras now recording House and Senate floor proceedings along with committee hearings that had been open to broadcast coverage for many preceding years. We compiled excerpts of the debates and proceedings. The program introduced NPR Congressional correspondent Cokie Roberts to television and launched her on a huge career at ABC News.

Two PBS broadcasters, Robert MacNeil and Jim Lehrer, decided to take their nightly half-hour, one-topic television news talk show to an hour-long program in 1983, becoming the first network news program to do so. I was hired as a producer on the foreign affairs and defense beat. That defining moment led to what I would call the “refining moments” of the rest of my career, working with some of the most skilled craftsmen in television news. 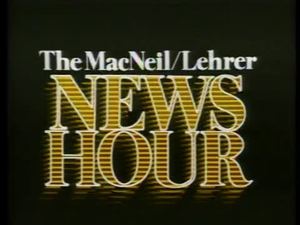 The MacNeil/Lehrer NewsHour quickly rose to become what many believed to be the most thoughtful, civil, and balanced broadcast news program in America. I eventually became managing producer of the show, supervising videotaped documentary segments recorded in the “field” that balanced the in-studio interviews MacNeil and Lehrer conducted.

The rest was history, and I was eyewitness to much of it, either in person or on video feeds that came into our control room.

I covered two US-Soviet summits in Geneva, Switzerland, including the first Reagan-Gorbachev meeting. I went to Japan when President Ford met with Emperor Hirohito. I was the producer in the “skybox” anchor desk for 10 Presidential nominating conventions, from 1988 to 2004, watching the proceedings and acceptance speeches from a lofty position.

The NewsHour sent me to China for six weeks in 1993 to write and produce a 10-part documentary series as it adopted a more capitalist economy. It was not my intention, but the series went over well in China. One day the embassy in Washington called to tell me President Jiang Zemin would give the NewsHour his only broadcast interview during an upcoming U.S. visit. That may have been my biggest Washington “scoop.”

I spent five weeks bivouacked in luxury at the Ritz Carlton in Doha, Qatar, during the second Gulf war, ostensibly to cover U.S. Central Command Headquarters. The news people there went to war with a knife and fork, since, given the time difference, Pentagon briefings trumped our morning Central Command briefings with more current, and better, information. We ate and drank well at the Ritz.

Fortunately, that was the closest I ever came to war in my career, although like most of our press club members, I could ramble on with journalism “war stories.”  But I’ll close by saying it was a great run; I’d do it and even more all over again if I could.

← Defining Moments: Life Is What Happens While You Planned for Something Else
Zoom Meeting Oct. 7 — Addressing Increased Health Disparities During a Pandemic: Immokalee Case Study →