I always knew I would become an educator and an author. I wanted to become a radio announcer and later a television anchor. Two out of four isn’t bad.

A lonely child of divorce, foster care, and split allegiances, I found acceptance and praise in school. Books were my escape – on the bus, under the covers, on the steering wheel, and under my tree. From a blue collar environment, I was still well-spoken and acted in school plays as a Thespian and Honor Society member. Most significantly, I gave morning announcements over the P.A. and reported school news on WKBZ radio, riding a horse to the studio.

Mom plugged me into a real job goal – accountant – to find a husband of means and marry up. I wanted to major in journalism, but the university scholarship with a totally free ride was at Oakland University, a growing liberal arts college in Rochester, Michigan. I hoped the secret application to work full time at WKBZ would bring a positive result so I could escape.

The WKBZ offer arrived and was tossed by Mom to keep me in college. During semester break, I took all my savings and flew from Detroit to Santa Barbara, California, to become Gidget. After being bruised and battered from the heavy surfboard, I found work writing and clipping news releases as well as touring Asian visitors in Public Relations at Douglas Aircraft during the DC-10 rollout that stopped traffic on the freeway. I was a California girl with a Tijuana tuck-and-roll Corvette I drove weekends in Belmont Shore or Huntington Beach, and I rode my ten-speed racing bike to work to save gas money to surf or ski.

An honorary political internship appointment took me to Washington, D.C., when I returned to college a year later. At that time, only males received D.C. internships. I didn’t notice the typo on all my correspondence:  Dan.

In the minimal tech era, the correspondence mistakenly made arrangements for Dan, not Diane, at a men’s boarding house. Fun as that might sound I moved to a girl’s dorm for a boarding high school. My four roommates – yes four – were teens from very wealthy families who taught me plenty; I taught them to budget.

Mid-career, I returned to D.C. as a writer and administrator of multi-million-dollar grants, but it wasn’t idealistic as in my youthful memories.

As an honorary intern, I worked with the National Association of Manufacturers to lobby for benefits to manufacturing and small businesses which was part of the Republican platform. When I returned to D. C. mid-career, I ran potential bills to House and Senate offices and lobbied powerful staffers and their bosses to support workforce issues to benefit women, migrant and seasonal workers, those with disabilities and others needing a hand up. This activity was for a different political platform than my internship.

I wrote and administered regional grants for a K- university consortium I organized in Southwest Florida and was active in the local community, often interviewed on local television.  One interviewer said I could fill more air with no prep than anyone she knew (was that a compliment?) As a member of the Naples Chamber and other organizations and with respected members of the legal, judicial, education, and charitable community, we were the founding board members of today’s very successful Community Foundation of Collier County. 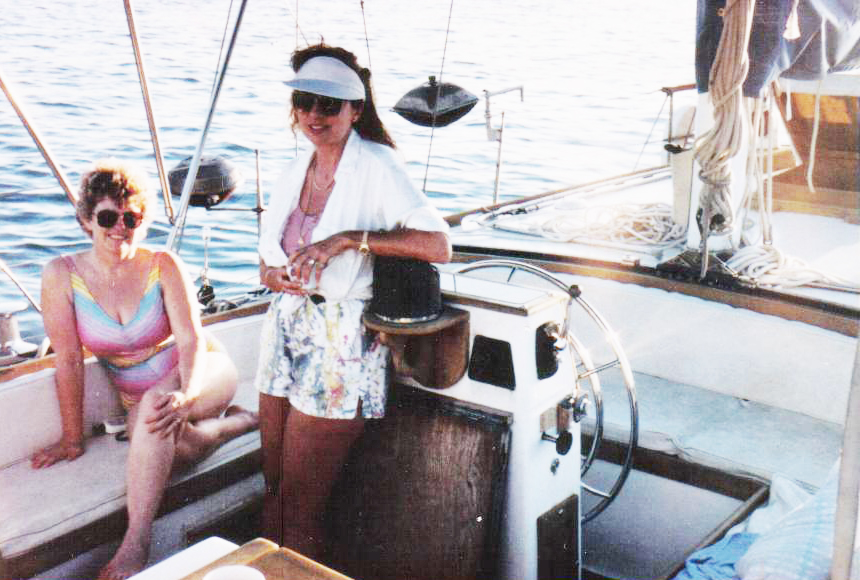 D. K. Christi standing at the wheel in the cockpit of the Lady Ace yacht

After a career move to Idaho, my family and I sailed three years from Ft. Lauderdale through the islands to Venezuela and back on our 67-foot yacht, Lady Ace. With one of the first “laptops” that came with a C drive storage and lots of floppy disks, I wrote about diving for lobsters, filleting fish, praying through tropical depressions, teaching in island schools, delivering sideband and VHF news and weather in harbors, and being very much alive, often afraid but full of the agony and ecstasy only experienced by big adventures. A hurricane headed straight for us up river, six anchors out in Boquerón, Puerto Rico – a defining moment.

I was known as Lady Ace in our Bahamas blue water sailing community for my morning weather reports and news bits collected from multiple nations via the Sideband.

Arirang, a 500-page volume I wrote that includes travels and residence in Europe, Asia, and the Caribbean, had a great season, but memoirs disguised as fiction are tricky for a first novel. 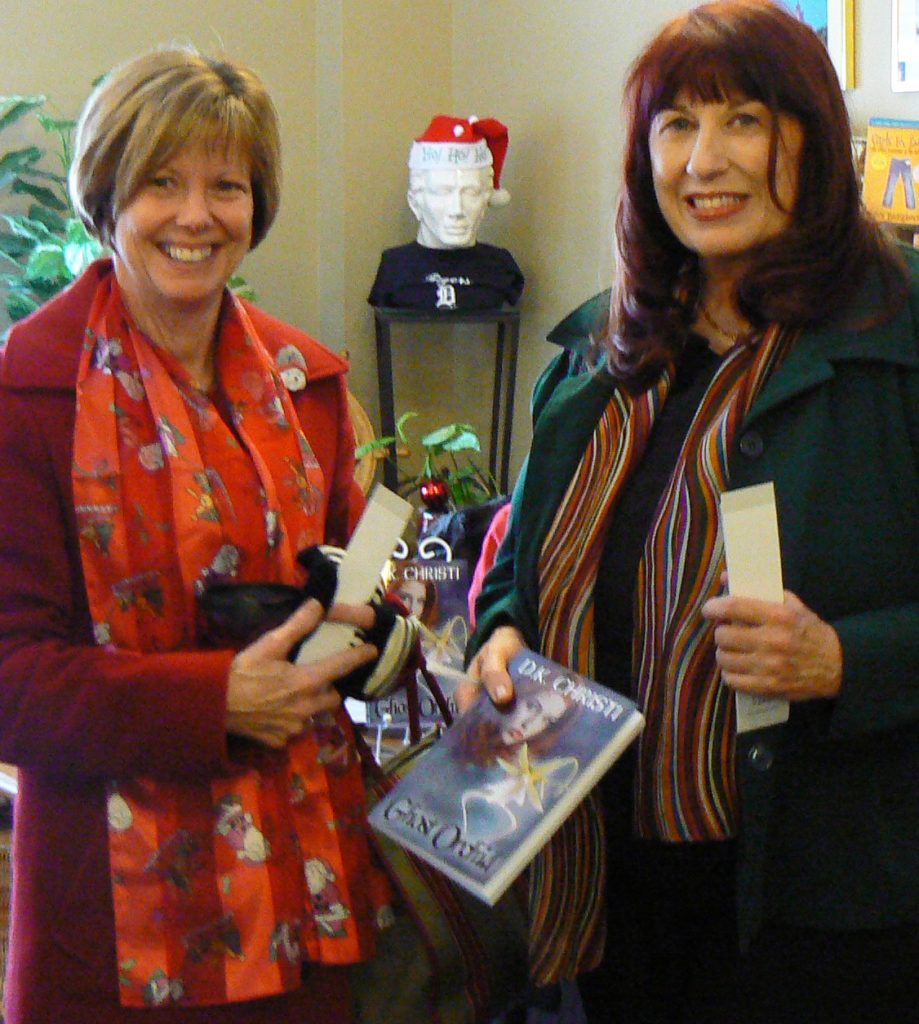 D. K. Christi, right, at a book signing for her novel, Ghost Orchid

Today, I write magazine features and a popular dog column, “Our Best Friends,” that is open to interview anyone’s clever dog for 500 words of fame and a photo. I published stories in seven anthologies and two more novels, my favorite being Ghost Orchid, set in the Corkscrew Swamp and winding the gossamer tendrils of unique and endangered ghost orchids around the search for family roots that many seek today. The novel is accompanied by relationships and romances full of mystique and mystery that my obsession with ghost orchids allows. Bamboo Ring was later published as a prequel to Ghost Orchid.

My rising workforce career in CEO and board of director positions included writing curriculum implemented in the states of Idaho and Florida and teaching at the University of South Florida. As an editor at Arthur Young & Co. in Seoul, South Korea, for five years, I also wrote Basic Skills curricula for the 8th U.S. Army that was implemented on all Army bases in South Korea. Renaissance Man, starring Danny DeVito, was set in a BSEPS classroom.

I transitioned from state and regional responsibilities, supervising administrative staff and up to 15,000 clients, to authoring by writing for an online news service in the entertainment industry with the thrill of interviewing Whoopi Goldberg, Jack Hanna, Rob Reiner, Marlo Thomas, and numerous other stars and celebrities. Marlo Thomas was my favorite – a woman of grace, elegance, and an overflowing heart who was pleased to tell me how much she and Phil enjoyed the Everglades where my book Ghost Orchid was set.

As a contributor to Estero Life Magazine and Spotlight News Magazine today, feature articles include everything from opera to magicians. Those who inspired my fiction writing and the muse that made it sing no longer provide their influence, and though I always believed a writer must write, life redirected what I write.

With the voice from the radio days, I enjoy presenting at events, spending several years giving the Sunday inspirational readings at my church, and one guest sermon. In my workforce career, I was a conference keynoter and workshop presenter. Whether about the mystery of ghost orchids or the mystery of life, sailing, or writing, I love an audience and a freelance writing assignment. I still yearn for that radio spot.