Scoop encourages Press Club of Southwest Florida members to share stories about their lives, interests, hobbies, etc. If you would like to contribute to “In Your Words” email your contribution and photo to Penny Fisher at pfisher@naplesnews.com.

A Passion for Fashion

My grandmother, Marianne Gintz, was born in a small town in Pomerania. Her family owned a mercantile store selling fabrics, among other things. Marianne was beautiful and knew how to make the best of it. Shoes were definitely “her thing” and that fashion obsession was passed down to us.

Whenever a bolt of clothing didn’t sell in the family store, a garment was made for Marianne. Soon every woman in town wanted a piece of specialty clothing. At age 13, Marianne served as an apprentice to a milliner. From that moment, not only could she produce magnificent hats but she could replicate any garment—by sewing, knitting, crocheting or embroidering.

She married the handsome young Wilhelm Gintz. He was a ladies’ man and card player. They moved to a town called Doelitz, Germany where they managed a small hotel. They had three daughters and, finally, a boy.

My mother, Meta, was the third daughter and inherited both her mother’s looks andlove of shoes. She also learned to sew, knit and crochet but chose to become a secretary to the mayor. She loved the job because she could race down to the local river for a quick swim at lunchtime. Soon, the lure of Berlin, Germany called.

Once there, she started working as a secretary in the busy Berlin garment center. There, she met my father, the handsome young Dr. Gustav Kohlhagen, who was also quite a ladies’ man. After a long courtship, they married and settled down for some serious shopping and bargain hunting in Berlin’s department stores. I was born a year later and was called Fritzi in honor of my father’s grandmother, Frieda.

My family was fortunate to escape to the United States before Adolf Hitler was in office and happily settled into our new lives in Brooklyn, New York. New York City was a haven for arts and had already become the garment center of the U.S.A. My mother and I had the best time bargain shopping at the many retail opportunities offered in the Big Apple. Along the way, I gained the best possible education.

Naturally, I inherited the passion for fashion. After a brief career in old-time radio as a voice artist and a producer/director, I met and married my late husband, Gerald Thorner. He was back from combat as a Navigator on a B-29 and had flown seventeen missions over Japan. Although he wanted to become an artist he was a realist. The GI Bill allowed him to get a degree in optometry and he opened his own practice in Bay Ridge and began his pursuit of me.

I knew how to knit, crochet, embroider and sew but could not produce any of the garments I envisioned. A dressmaker made some of my ideas reality, including my bridal gown. I settled down to being housewife and, three years later, was blessed with my own little fashionista, Heidi. 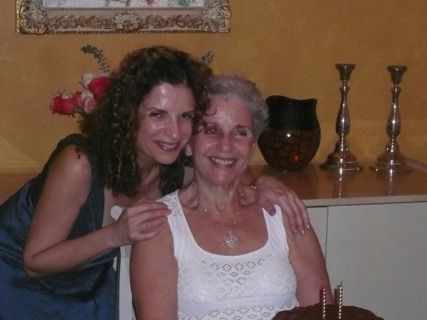 In no time, it was clear to me that she was the truest fashionista of all.  Even as an infant she wouldn’t allow me to put socks on her that didn’t match. She slashed and recreated every Barbie Doll garment I bought her. She designed all her own stationery. And, she changed her outfits two or three times a day.

On Thursday, my day off, I took the subway into Manhattan to shop, walking from Macy’s on Broadway and 34th Street to Fifth Avenue all the way to 57th Street. In those days I did it all in heels. When Heidi was old enough she joined me.

When it was time for college, she couldn’t decide on a career path. We steered her toward the fashion industry. She obtained a Bachelor of Science at University of Vermont and then a degree in Fashion Design at the renowned Fashion Institute of Technology (FIT). After graduation, her first job was a full charge designer of lingerie and loungewear. She kept rising in the industry and lived in Manhattan. I would take the new express bus into Manhattan on my day off, make my typical store survey, then go to Heidi’s place of employment to watch her work her magic.

When my husband decided to sell his practice and retire to our beloved Naples, Florida I still felt the need to shop in the Big Apple for another three years. Then the Big Apple didn’t seem as bright and polished anymore and some of the bigger named stores where available in Fort Myers and, later here in the 239.

Heidi and her brother, Marc, (another FIT alumnus, photographer and graphics guru) would come and visit every six weeks or so. Marc would go out and photograph the area with his dad. Heidi and I would, naturally, shop. Marc graduated with two degrees – one in Fine Arts and Sculpture and the other in Advertising Design. His first assignment was a fashion shoot for the late designer Carmelo Pomodoro.

What a joy when a head-hunter grabbed Heidi to become VP of Merchandising and Design for Chico’s in Fort Myers. She held that position for several years before going into a retailing venture with a former colleague.

Heidi met and married a long-time resident of Naples and one of its first endodontists Dr. Gary Layton. Growing bored with managing her husband’s practice, Heidi began a new web-based venture YourWardrobeConcierge.com. She has clients as far away as Georgia and Louisiana.

Our passion for shoes is unabated and now encompasses purses. High heels are a thing of the past for me, but there are tons of fashionable low-heeled, non-slip soles available. Naples has become a Fashion Mecca and for that we are blessed.

← Who says a Summer Event in Naples won’t Attract Anyone?
Journalism Awards for SWFL Journalists →