I am not a journalist and, I am not a writer, but I have been both. Oddly enough you can still go online, Google my maiden name, Zeldner, and find me as an editor of the University of Buffalo student newspaper called The Spectrum in 1958. Writing was something I always enjoyed but, oddly enough, I never thought of it as a lead-in to a profession.

My mother, who left high school at 16 to get married, was an excellent writer and she taught me how to write. She would look over my school papers and correct for vocabulary, grammar, punctuation, and sentence structure. That’s how I learned. Oddly enough not one of my three children would let me look at their papers, much less correct them.

What I did end up becoming was an audiologist. The idea of the field of speech and hearing started when my high school English teacher assigned us an essay titled “What I Want to Be When I Grow Up.” I had no idea. My mother had read a newspaper article about the daughter of a friend who was a speech therapist (now called speech pathologist) at a hospital in town. Mom suggested I call the speech therapist and ask if I could follow her around for a day. I did that and found it to be an interesting profession.

We had the World Book Encylopedia at the time, the original “Google.” At the back of one of the volumes were coupons that allowed you to request a paper on any subject—free. So I sent off one of the coupons asking for information on the field of speech therapy. Very shortly the information came in the mail, and I vividly remember many sheets of onion skin paper on which was typed everything I needed to know about my subject matter. I am embarrassed to tell you that the paper I handed in to my English teacher had a strange similarity to World Book’s contribution. 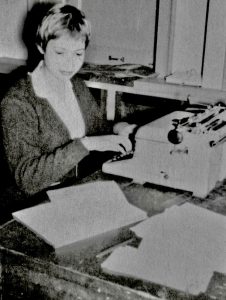 Iris Shur in 1958, news editor of the University of Buffalo student newspaper

That’s how I decided to major in speech therapy in college; it was as simple as that. When it came time to decide about graduate school, I felt that speech was not specific enough for me and opted to obtain a masters in audiology, closely allied to speech pathology, feeling it was more quantifiable.

So fast forward about 45 years to when my husband and I retired to Naples, Florida. I had been an instructor at the Upstate Medical Center in Syracuse, New York, worked at Children’s Hospital in Boston, and was the Director of Audiology at Beth Israel Hospital in Boston. After that I opened a furniture consignment store called Tables to Teapots in Acton, Massachusetts, which was very successful. Prior to moving to Florida I sold my consignment business, my husband sold his marketing research firm, but we remained partners in a focus group business that is ongoing.

One day, shortly after moving to Naples, I was reading the Naples Daily News. There was a small announcement that the paper was looking for community input on local happenings such as tennis news. “How boring is that,” I said to myself. I emailed the editor with my thoughts, enclosing a creative piece I had written, suggesting that he spice up the offerings with more than sports news from gated communities. I guess he took my ideas to heart, or maybe he was going to do that anyway, but soon I had a column in the paper called “The Shur Thing.” Others had columns about books and movies and their thoughts on the world at large. I had a good run, about nine years, until the newspaper changed hands and all the community contributors were discontinued.

After that I was asked to provide my columns to a magazine that went to residents of Pelican Marsh, called Pelican Profile. I contributed to the Pelican Profile for about four years until Covid hit and the magazine went out of business.

Occasionally I am asked to write an article for the Federation Star newspaper, which provides information about the Jewish community in the area. I’m also active in two local writing groups. My biggest writing accomplishment was being published in the New York Times in the Tiny Love Stories column. Then, to add to the excitement, my story was picked to be published in the Tiny Love Stories book. And, even more, the New York Times uses the tiny love stories to teach writing to school children, and my story is one of a handful used for that purpose. Quite exciting for just 100 words!

Recently I completed my current continuing education hours required to maintain my Audiology license as I do every three years. It is unlikely that I will be working as an audiologist at my age. I take the courses to keep up with the field and to keep my brain active. At the end of each course there’s an exam. I usually get 100%!

So, writing and audiology continue to interest me. Both were good choices and both came about unexpectedly.

[Editor’s note: Defining Moments is a series in SCOOP to give you, our press club members, a forum for writing about highlights from your career. Please share your Defining Moments story for an upcoming edition of SCOOP by emailing your article of 600 to 1,200 words to info@pressclubswfl.org, attention SCOOP Editor Karla Wheeler.]