Entrepreneur, writer, speaker and former NPC VP of Programs Randall Kenneth Jones will release his book titled SHOW ME on Nov. 15. Ten years in the making, SHOW ME is a compilation of interviews and whimsical anecdotes that showcase unexpected lessons from Jones’ screwball life juxtaposed against the humor, pathos and wisdom gleaned from his conversations with celebrities, business leaders, journalists, entertainers, sports legends and more. 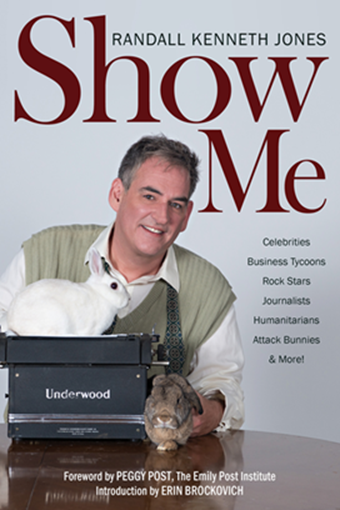 SHOW ME is based on Jones’ Naples Daily News column, “Business Class.”

Featuring a foreword by NPC member Peggy Post (The Emily Post Institute) and an introduction by Erin Brockovich, SHOW ME is described by New York Times bestselling author Janet Evanovich as “a bit David Sedaris, a touch Dale Carnegie, a dash of Janet Evanovich and a whole lot of Randall Kenneth Jones.”

“Jones relates to my ‘business’—and so many others—by exploring basic moral, ethical and human values,” says NFL Hall of Fame Quarterback Sonny Jurgensen. “He focuses on what we all have in common and not on our differences.” Rock music’s Pat Benatar and Neil Giraldo describe SHOW ME as “…a joyous romp. A peek behind the curtain.”

“Randy takes ‘our’ Midwest upbringing and applies it to his writing. He sees the positive in people—he focuses intently on his interviewees and their stories,” says Erin Brockovich. “He tells it like it is, but does so with respect and grace.” Shark Tank’s Barbara Corcoran adds: “Randy has created a literary Dancing with the Stars. Wickedly funny, yet profoundly touching! SHOW ME is Shark Tank meets NASCAR meets Broadway meets The Partridge Family.”

The official book launch is being hosted by the Naples Daily News on Wednesday, Nov. 16 at 10 a.m. Click here for more information.

SHOW ME is published by Smart Business Books, Cleveland, Ohio.

← November 3 Luncheon – Election Insight from the Pros: Orr, Jones, Lytle and Cribbs
Will Your Vote be Electronically Hijacked? Not in Collier County →