“Why Naples?” asked Randy Jones, VP/Programs for the Press Club of Southwest Florida and founder of Mindzoo, a marketing, advertising and public relations company, speaking about why he moved to Naples and started his company in 2001. “Naples has water, sunshine, a high education and intelligence level. So why not Naples?” 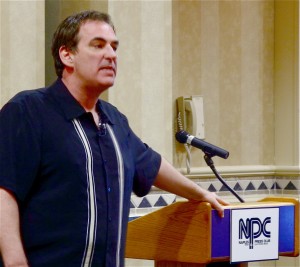 Continuing in that vein, Jones’ NPC talk centered on the “Nugget of Wisdom” that he extracts from each of the people he interviews for his Business Class column in the Naples Daily News. Some were in attendance at the luncheon. He said he loves to talk to people and learn what they do and how they do it.

He paid tribute to NPC founder, Rhona Saunders, because, he said, he owes everything to her. She paved the way for him to meet Myra Daniels. He said that Daniels changed his life when she asked him how old he was, and when he answered that he was 47, she said to him, “Well, you have a long way to go–you better get busy!” 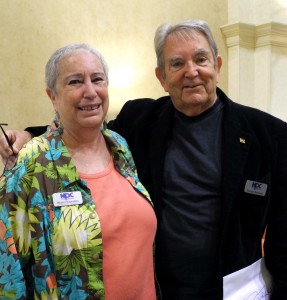 Saunders also introduced him to Phil Beuth, NPC member and former owner of ABC-TV. Beuth has phenomenal stories, Jones said, and Beuth introduced Jones to Jack Hanna, host of the TV show Wild Countdown. Nuggets from Hanna: “Animals do not waste food, they do not abuse their own children, and the elephant is one of the most intelligent creatures on the planet.”

Jones spoke about his interview with his 82-year-old father, Kenneth Paul Jones, for a Fathers’ Day story he was writing for his Business Class column. His dad’s Nugget: “Treat everyone like family.”

“Janet Evanovich is amazing,” Jones said. When interviewing her he asked, ” Why are you successful?” And she answered by talking about everyone else and then saying, “and maybe I have a little talent.” Evanovich has written 54 books, and she started the Stephanie Plum series when she was 52. She signed books for Jones’ whole family, and after his dad read one of them, he loved it, and has now read 16 of them. Evanovich’s Nugget: “I write books that give people ‘joy.'”

Candice Olson, Canadian designer and host of the Toronto-based TV shows “Divine Design” and “Candice Tells All” told Jones that her work is a fusion of traditional form, scale and precision. Her Nugget: “There’s something comforting about the traditional–such as a handshake and a personal meeting.”

Florida black-and-white photographer Clyde Butcher’s Nugget: “Color gets in the way of seeing what is really in the picture; when all you look for is color you miss the details.” 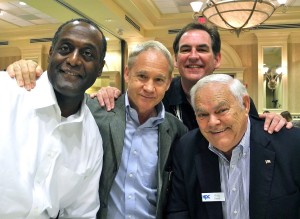 American soap opera actress Kassie DePaiva’s Nugget: “There’s nothing wrong with drama; if you pay attention to it, you can learn from it.”

Jones introduced Robert Green, Jr., the FGCU entry gate greeter. Jones said that Green is polite, energetic and personable to all of the people coming through the gate at FGCU, and he’s a person who has a great outlook on life. Green’s Nugget: “You always get a second chance to make a first impression.”

Michael Feuer, author of The Benevolent Dictator; his Nugget: “If you don’t ask, you don’t get.”

Jones wrapped up his talk with this advice: “Get involved. Have your say. Make a difference. And support your local media!”