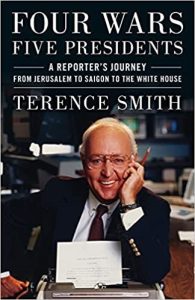 Our featured speaker will be award-winning journalist Terence Smith, who has been a political reporter, foreign correspondent, editor, and TV analyst over the course of an almost five-decade career that included The New York Times, CBS News, and the Newshour on PBS. In 2013 he was inducted into the Professional Journalists Hall of Fame.

Terence will be entertaining the press club with stories from his new book, Four Wars, Five Presidents: A Reporter’s Journey from Jerusalem to Saigon to the White House, which Dan Rather calls “an adventure story of a reporter’s career, well lived, well told, big hearted, and chock full of great stories.”

Stay tuned for further details and a link to purchase your ticket on Eventbrite.

← Defining Moments: London Bus Cruising Lake Michigan and a Lifetime of Newsworthy Productions
Press Club Members Invited to PRSA Jan. 25 Luncheon, “Jack of All Trades But Master of None?” →