The Naples Press Club was founded in 1996 by Terrence J. “Terry” Miller, who had moved to Naples in 1992 with his wife, Rhona Saunders. For many years, they were members of the National Press Club in Washington, D.C., one of the oldest and most prestigious press clubs in the world. Terry based the formation of the Naples Press Club on that model.

The goal was to establish a club where like-minded communications professionals, whether still working or retired, could meet and exchange views on local events, people and media, and the world at large. 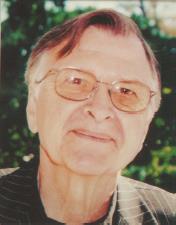 Terry Miller passed away in June 2004, but Rhona Saunders remains an active and involved member as the “Honorary Founding Member” on the Press Club’s board of governors. The club’s scholarship program was named in Terry’s honor. The Terrence J. Miller Journalism Scholarship fund has now provided more than $100,000 in scholarships to benefit young people interested in pursuing careers in journalism.

In 2007, the Naples Press Club filed with the State of Florida to become a not-for-profit 501(c)(6) “business league” corporation.

In 2019, in recognition of the growing membership and a wider geographic reach, the Naples Press Club changed its name to the Press Club of Southwest Florida. Today, the club has 140 regular and associate members, including working and retired journalists and executives from the print and electronic media fields, authors and editors from the publishing world, and journalism students and faculty.

If you currently are a member of the Press Club and have not yet renewed your membership (only $50 per year), please do so today by clicking here. If you are not yet a member, please join us as we lead the way on protecting First Amendment rights, free speech and other current issues, through our newly launched Press Club Roundtable virtual programs. Click here to watch on YouTube our recent Roundtable interview about the Attack on the Capitol.

Be sure to watch for special programs and activities as we celebrate the 25th year of the Press Club of Southwest Florida.