No story – no matter how important – is worth endangering the life of a journalist: That was the message of two local reporters and a law enforcement official who addressed how journalists can protect themselves in today’s increasingly dangerous working environment.

The panelists spoke to nearly 50 Press Club of Southwest Florida members and their guests attending the January 9 luncheon meeting at Tiburon Golf Club. 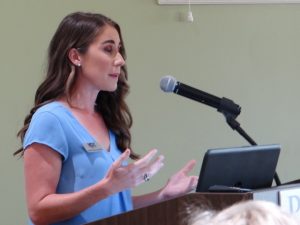 Delia D’Ambra, a NBC2 new reporter who was the victim of an on-air assault last year while covering a routine story about a Fort Myers ice cream store that was rumored to be closing, said her training to fight back, yell loudly for help, and record on camera her call to 911 helped save her life. She said she was fortunate that she learned how to defend herself at an early age, having grown up in a family of law enforcement. 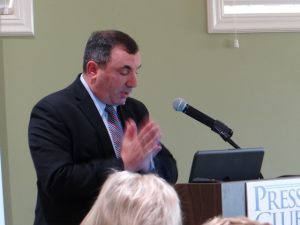 Rich Kolko, a security reporter for WINK-TV and a former FBI agent and spokesperson, talked about the importance of journalists being keenly aware of their environment. He advised a reporter covering a story to initially scan an area for potential threats, pre-determine an exit strategy, and carry a cell phone and charger at all times. 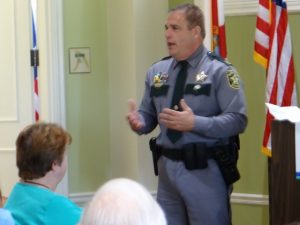 Captain Timothy Guerrette of the Collier County Sheriff’s Office offered a law enforcement perspective on safeguarding citizens, as well as journalists. His said that although some tragic situations involving firearms cannot be prevented, both citizens and journalists can protect themselves by letting someone know where they are and following their intuition to avoid potential danger.

All of the speakers agreed that the current newsroom business model of the “multi-media journalist” – one reporter who is expected to assume all responsibilities of the former reporter/producer/photographer team – must be reassessed and that returning to the old model of partnering journalists would better protect reporters on assignment.