Meeting My Exceptional Other

Even though I still had plenty of friends and activities, I felt terribly alone when my husband died. We loved life together for over 40 years. Who else would care if someone snubbed me at a party? Who would be proud of me when I got an accolade? Most of all, who would be sympathetic when one of our kids was in trouble?

In order to take my mind off my loss, I went on a bus trip in Spain with another recent widow. I saw that single women who came by themselves on our trip were very lonely even with lots of people around them. My thought of traveling the world alone lost its luster.

Then I considered joining a computer dating service. I was a computer dating expert—not as you would expect but because, in the early 1970s, my husband and I owned one of the first and at the time largest computer dating services in the country. This was before the internet, when the matches were made on a mainframe computer that took up an entire room. I knew about laundry lists for potential mates. The reality is that finding a compatible someone with a specific age, education, height, and religion, hundreds if not thousands of men need to be signed up for that dating service. Forget about adding someone, for example, who loves Verdi or who is of the same political persuasion. Given the pool of available mates, there are only a limited number of qualities that can be matched.

I came up with a long list of dating requirements. Any chance of meeting the perfect mate was slim to none. To begin with, men who were my age were usually looking for women 20 years younger than they were. I wanted someone close to my age. This would be difficult because I don’t live in a large metropolitan area with lots of potential dates in my age range.

My mother had two more husbands and several long-term boyfriends after my Dad died. None of them had any resources to speak of. I knew, after seeing my mother outlive her money, I wanted someone who, to put it bluntly, had money. Actually, it wasn’t because I wanted his money, I just didn’t want him to need my money. I used to be angry at my mother for spending her money on her husbands and boyfriends, but now I’m happy she had a good time! And so what? But I would rather stack the deck in my favor.

A very important request was that my date live nearby. At my age, I didn’t want to have to drive for hours to go out with him. One of my friends met her “boyfriend” online and he lives two hours away. They alternate weekends from her house to his. Just hearing about it exhausts me.

Then I added neat, nonsmoker, not a vegetarian and non-golfer to my impossible list. Oh yes, I also wanted someone who did not sit in front of the television for every sporting event saying, “But this is the most important game of the season.” I mean, come on, where would I ever find the man I was looking for? By the time I finished my list I had 48 requirements! You’re probably saying, “She should get a robot.”

If I didn’t think computer dating was going to work for me, how would I meet that perfect guy? As it happened, a divorced friend of mine actually took an adult education course on how to meet men. She told me the first thing she was taught was to ask everyone she knew if they could fix her up with someone. So she asked me first. Even though she had been divorced for years, I never thought of arranging a date for her with the one single widower I did know.

“Yes,” I told her, “I do know someone. He’s a very accomplished retired professional man but he has one flaw. He likes to blow his own horn.”

So I did. A few weeks went by and she didn’t call to tell me about her date, so finally I called her. “Did you go out with him?” I asked.

“Yes I did,” she replied, “but he only talked about himself!”

There is a silver lining to her story. The second person she asked for a dating referral told her his best friend lived out of state and was recently divorced. He would arrange for his friend to have dinner with her the next time he was in town. They eventually met and she married him!

So, armed with her experience, I decided to use the same technique for meeting someone.  It wasn’t long before I was at a neighborhood party where I could try out my method. One couple I knew came up to me to express condolences on my husband’s passing a year before. “How are you doing?” they asked.

“We know a wonderful man,” they told me and explained that he was widowed after a 50-year marriage. Their description of him sounded great so I asked them to give him my phone number.

Well, he called me for a brunch date a few days later and we’ve been together exclusively for seven years. He has almost everything I asked for and more. He can, in his 80s, even see to drive at night!!!! 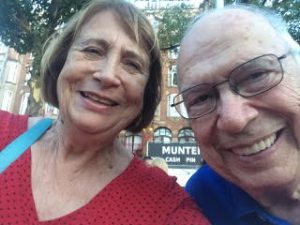 The relationship I have with him is ideal. We didn’t know it wasn’t unique until someone sent us an article about a phenomenon called LAT which stands for Living Apart Together. That’s us. He has his house and I have mine. I had to give up only a small section of one of my many closets for his weekend clothing. I know that women everywhere will understand me when I say the thing I worried about most was not sex with a new partner, but giving up my closet space—which had expanded considerably since my husband’s death.

To start the relationship in the proper direction I told my new boyfriend I didn’t cook. Well, not anymore. After preparing three meals a day for 41 years for husband and children, I decided I didn’t cook anymore. I would assemble, but I wouldn’t cook. “No problem,” he said.

Every weeknight my XO (stands for Exceptional Other, I didn’t like the term Significant Other) rings the doorbell to pick me up for dinner. Often he has a bunch of flowers in his hand. My heart flutters as I greet my “date” at the door. 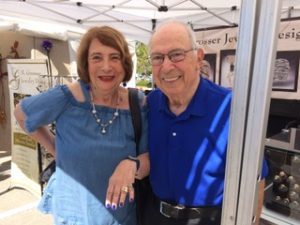 During the weekdays he does his thing and I do mine. I love it! No one is asking me “where are you going?” “when will you be back?” questions. Then on Friday evenings he shows up with his suitcase in one hand and his breathing machine in the other as he moves in with me for the weekend. I like my house better and so does he, so we rarely stay at his.

We travel together several times a year on road trips or cruises, visiting family or going to his professional meetings across the country. When one of us is ill, the other provides loving care. This relationship couldn’t be better for either of us.

When friends ask us why we don’t get married I explain, looking serious, that we have a difference of opinion, “I want to have more children and he doesn’t.”

And of course, since I’m in my 70s and he’s in his 80s, our friends laugh. But truly, I have the ideal “marriage” already and my friends are all jealous. I have all the fun and almost none of the responsibilities.

Nothing is ever perfect, of course. Unfortunately, I hadn’t thought about the flip side of his having loving children when I compiled my wish list of what I wanted in a mate. I forgot to ask for someone whose family would be totally accepting of his new relationship. Oh well, you can’t have it all. I understand this problem of adult “children” having a hard time with someone new in their mother or father’s life is not unusual. I would have preferred otherwise. They let me know, in subtle ways, that I am not family. At holiday dinners, for example, they never let me help in the kitchen or be on the cleanup detail. They insist I’m a guest no matter how many times I attempt to help. They never accept invitations to come to my home for dinner.

We’re working it out.

My adult children seem to have taken my XO in stride. I think having a grandmother with several husbands was a good training ground for them. When one of my sons was asked how he felt about me having an exceptional other he said, “It keeps her out of my hair.” I like to think he was just being funny.

Recently we got engaged. We tell people I just wanted a new ring. When asked when we’ll be married we say, “It took us seven years to get engaged, so don’t hold your breath.” The truth is, we preferred the term fiancée to the other alternatives.

I was lucky to get almost all my criteria met—and then some. My fiancée wants everyone to know he feels equally lucky.

The two of us wrote this love story. Perhaps we are together part-time but our love is full-time.