“It took five deaths to get something from the community,” said Tom Marquardt, as he expressed his frustration with the lack of support and respect for journalists prior to the mass shooting at the Capital Gazette in Annapolis. In the November 1 NPC program, Tom provided an emotional and engaging chronicle of the steps leading to and following that fateful day on June 28 when five of his former colleagues were killed by the alleged shooter. He described years of threats and social media rants that he and his news staff received but could not be addressed by local law enforcement due to the lack of evidence. After the rampage—the worst shooting in a newsroom—the community rallied to show support. Unfortunately, it was too little, too late.

Following the tragedy, the community rallied, holding a candlelight vigil and raising more than $2 million. Many cried at memorials. Subscribers and others were unaware of what was happening to their local paper. Amid the terror and loss, the newsroom team made certain that the Capital Gazette did not miss an edition. 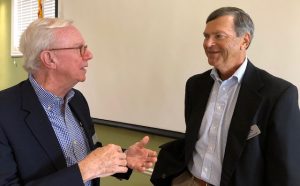 Tom was the only person to talk to the LA Times and was interviewed by media outlets across the country. Since he no longer worked at the newspaper and was not precluded from being interviewed because he was not part of the ongoing investigation, he was able to share the history of the situation, as well as his perspectives. He felt he had an obligation to tell the story to honor the people who had died and to support journalists. His journalist peers gave up their lives for their profession.

Tom described how he quickly found out what it was like to have media stalking you and the pressure intense media coverage puts on an individual in the middle of a tragic story.

Shaming press is a new strategy, and it appears to be working. We no longer can tolerate these actions. We are the choir. We understand. We need to keep beating the drum for journalism, the free press and the First Amendment.

We can’t put the genie back in the bottle. Newspapers and TV news were once revered. Now we don’t have as many reporters. In the Q&A, Tom told the audience that his newsroom once had 242 employees, then dropped all the way down to 66 and currently stands at 33.

Mike Deeson, a 12-time Emmy winning investigative reporter and a member of the First Amendment Foundation of Florida, jumped into a discussion about fake news. He defined fake news as a “fake” from the perspective of the receiver—if he or she disagrees, it is fake. Mike expressed his concern that some information spreading rapidly across social media is truly “fake.” He used the “Pope endorsed Trump” post that received more than a million shares—not a million views, a million shares! 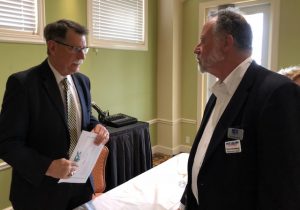 Mike talked about how critical it is to back up every detail in an investigative report/story with research and facts.

In his role as a board member with the First Amendment Foundation of Florida, Mike spends a great deal of time and energy convincing everyone that public records are ours—we, the public. Public officials work for us. Public information officers often believe their job is to keep as much information from media as possible. There has been a complete assault on the public records law. We should be proud that Florida has one of the broadest public records laws in the nation.

Public records tell us what is going on. They are part of the checks and balances required in a democracy. Mike explained that anyone can get a public record. Journalists have a privilege. If an agency says they are unable to fulfill a public record request, the agency must tell you why. The governor must release his schedule. He works for us. We have a right to ask. We can even have the public official’s cell phone number. We pay for the phone. It is ours.

The public meetings laws provide an important tool for us as citizens—and journalists—to watch over our government. Get to the truth. We can’t be shut down. The First Amendment keeps us free.

Cable news, unfortunately, is no longer objective. And, what about knowing that for some print and broadcast media, Facebook ratings and interest drives the stories. Is that an appropriate way to run a newsroom?

What can we do?

While there is an animosity toward media, we need to just keep doing our jobs. Be credible. Call out the lies, not just report the truth.

Listen to the other guys. Try to understand both sides of a story. We are too polarized. Mike would suggest that the jet plane ruined Washington, D.C., because lawmakers no longer hang out together over the weekends. It is easier to hate when you don’t your fellow lawmakers personally. Bring back civility and a willingness to agree to disagree.