Warm weather and sunny days on end is how Florida earned its nickname, “The Sunshine State.” Clever lawmakers in the 60s took inspiration from the name when they passed a law regarding open government, dubbing it “Florida’s Government in the Sunshine Law.”

It’s an easy concept to grasp: Speaking in literal terms, when you’re in the sunshine you’re exposed — everyone can see what’s going on around them bright and clear as day. Likewise, metaphorically, a government that operates in the sunshine is also exposed, unable to hide from the public what they’re up to.

Government agencies complying with these sunshine laws are essential for journalists, and all other members of the fourth estate, to continue keeping the public informed and those in power accountable.

So, what is it like being a journalist today? Not so sunny.

This topic was highlighted during the April 28 press club luncheon at Tiburon Golf Club in Naples, where panelists spoke to roughly 40 Press Club of Southwest Florida members and guests about the state of press freedom, with a particular emphasis on how the First Amendment impacts local journalism. 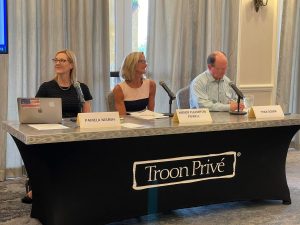 Panelist Pamela Marsh, executive director of the First Amendment Foundation (FAF), said the trajectory of transparency and freedom of the press is in “dramatic decline.” FAF is a non-partisan non-profit organization that believes government openness and transparency are critical to citizen trust and participation in our democratic society.

Marsh explained that every year at the legislature, more and more exemptions are added to the Sunshine Law. To date, there are now 1138 exemptions to open government laws. As a consequence, public records are taking longer than ever to be processed and fees continue to rise.

Panelist Wendy Fullerton, executive editor of the Naples Daily News and Southwest Florida region editor, told attendees that the process of getting access to public records is  “worse than it’s ever been.”  Having spent more than 32 years as a journalist in Southwest Florida she said journalists used to flock to Florida because of how easy it was to get information under the Sunshine Law. That is no longer the case.

Panelist Tom Doerr, director of local news and content for the Fort Myers Broadcasting company, said because of the fast-paced nature of broadcast reporting, with a mission to inform the public of news as it happens in real-time, a lot of initial reporting has to rely on “managed information,” curated by a public information office whose priorities often conflict with that of the press. Compounding this issue, government agencies often take advantage of vague language in the Sunshine Law, such as a requirement to provide records “within a reasonable period,” without defining what reasonable is, Doerr said. This opens the door to government agencies to act in bad faith, delaying records while stories lose movement, which creates a challenging environment for reporters.

Other than starting over, and blowing up all exemptions in Florida’s Sunshine Law, Marsh is confident that media-savvy younger generations who are growing up in the “fake news” era will be more educated and therefore empowered to seek out avenues to get to the truth.

Fullerton said her hope comes from what she sees in her local newsroom on a daily basis. While it’s likely government agencies will continue to try to operate out of the sunshine, journalists aren’t discouraged— they remain willing to put up a fight, fulfilling their duty of keeping the public informed at all costs.

“I’m just amazed at what they do every day, day in and day out, with all these walls that are put in front of them, and they are still determined and excited to come and want to do this for everyone,” Fullerton summarized.