“Journalism is local,” stated Cindy McCurry-Ross, executive editor of the News-Press during her welcome remarks at the 2018 First Amendment Festival. “There is great strength in local journalism.” She also explai 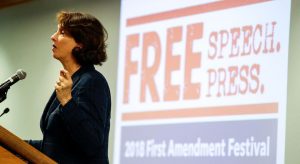 ned that we have a high-minded responsibility as journalists and that we need to seek the truth in a truthful way. See the News-Press editorial for more detail. A theme throughout the breakfast is that free speech and free press are the grassroots of our democracy. The pledge of allegiance took on particular significance as we spoke the words “liberty and justice for all,” which are the foundation of our democracy. This requires that we maintain the kinds of checks and balances brought to our lives through investigative, truthful reporting.

Alex Pena, a digital journalist for CBS News in Miami and one of the first journalism graduates from FGCU, was the keynote presenter. Described as an incredible risk-taker, Alex used photos and videos to tell stories about covering news in dangerous, war-torn and drug cartel-driven countries. Still in his early to mid-20s, he volunteered to cover news stories in Afghanistan and Mexico.

NPC Board members Connie Kindsvater and Rhona Saunders attended the “First Amendment in First Person Panel.” Notes from that: 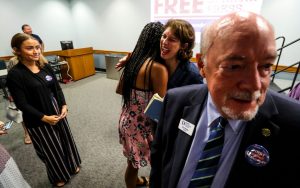 “The First Amendment protects your right to speak and it protects my right, as a journalist, to report what you say,” said Lacovone.

Williams spoke about a situation where a 13-year-old girl was beaten so severely that she died. Williams went to the Department of Children & Services for the girl’s records, after she died. “They refused to give them to us,” she said. “We had to get a lawyer, who told DCS that they did, indeed, have to turn over the records. We learned from the records that the girl had reported previous beatings, but nothing was done about it. As a result of that case, the rules were changed for the Department so that reporters were able to get access to national records and were able to use new tools to help them protect the children.

Kleinman spoke about the recent failure of the new pedestrian bridge that connected the FIU student housing to the campus. Sixty people were killed. “Getting the answers has been difficult,” he said. “Why did it happen?” He spoke about public-records requests, about state and national officials not handing over documents. That incident is now tied up in court.

Estrada told his story. Twenty years ago he decided that he wanted to be a journalist. His parents are both from Mexico, where being a journalist is a death sentence because of the drug cartels. He told them, “Here, in the USA, we do have First Amendment Free Speech rights that protect me.”

Millner said that we’re told in Florida that we have wonderful open-record laws, compared to other states. “What does that mean? Is it true?” she asked.

Kleinman said that it’s true, but in Tallahassee they have passed over 200 laws in the past several years limiting our access to records. “Lawmakers are concerned about privacy, like in the Parkland shooting—it’s hard to find out what happened and at the same time protect the privacy of the students, faculty, etc.”

Williams said, “We do have open record laws on paper, but it’s difficult to get the records. We need to answer questions. A lot of time and effort goes into forcing organizations to give us records.

Kleinman talked about redactions. “Some records that have been supplied to us have so many redactions that it’s a page of black lines. And, at times, police departments won’t give us information about tragedies taking place in your neighborhoods that can impact your wellbeing.” He said that in one instance, they did get the documents asked for, but the people who supplied them were fired.

Estrada agreed, saying “We usually get phrases like, ‘There’s no immediate danger in this area.’”

Lacovone said that the first thing she was taught in her first journalism class at FGCU was, “You’re a person first, a journalist second.” She talked about a story that she wrote on a transgender person changing her orientation and always asking her how she was doing.

“Gaining the trust of someone is really important,” said Kleinman.

Williams agreed, “People will share information if they connect with us. We are not cruel people; we try to be sensitive.”