Forty-eight years ago, new in town and knowing no one, I joined a computer dating service. Before that decision I had explored several other ways of meeting men.

I was working in a large hospital and, I figured, I would meet a nice doctor in the cafeteria. To my dismay the medical staff had their own cafeteria. My area of expertise was on a floor with no eligible physicians.

Another option at the time was to frequent a bar. I was just not good in that environment. Conversation in a noisy place with drunk people did not appeal to me.

Then I decided to go to adult education night school to study physics. Surprised you, huh? Physics? I had never taken physics in high school or college and I figured I could learn something interesting and meet men at the same time. But although I was the only woman in the class (see, I picked the right subject matter), I found no one there who interested me or was interested in me, and it turned out that I didn’t like physics after all, so I dropped out.

Computer dating was not the darling in the ‘60s it is today. Nowadays, many of my family members have met their significant others through computer dating. People of all ages are meeting on the internet and it is a very acceptable way to get together. It was, however, a fledgling concept 48 years ago. A stigma seemed to be attached to admitting you met someone via computer, but it seemed more acceptable to me than meeting in a bar. I plopped down my $10.00, filled out an extensive questionnaire, and waited for my prince charming to call.

Eventually I got printouts of names and phone numbers of several men. In 1967, strange as it may seem today, a woman just did not call a man. So I waited. Eventually, I did get a few phone calls.

My first date was very interesting. He arrived in torn off jeans, dirty sneakers with holes in them and a very bad attitude when he saw I wasn’t Marilyn Monroe. At least that is what it seemed like to me. He took me across the street for a soda. I tried to make conversation but he responded with grunts at best. Finally, I stood up, said goodbye, and walked back across the street to my apartment. He didn’t follow me. Not a good start in the computer-dating experience.

Things eventually got better and I began dating a psychiatrist who was the director of a rather large mental health clinic. After a while, though, it turned out that he went into the field to deal with his own problems. We parted as friends.

Then one magical night the doorbell rang. I had been on the telephone for hours with this potential date. He sounded terrific on the phone, everything I was looking for. Finally, we were meeting. I opened the door to find a tall, handsome, smiling young man. I immediately knew he was “the one.” 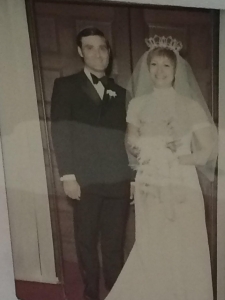 My husband had joined the computer dating service to meet women but also to see how well they worked. He was a marketing researcher who had expertise in writing questionnaires. He knew he could write a better questionnaire than the other computer dating services. He started a computer dating company called Phase 2 and it was the largest in the country. I answered all the phone calls. We had lots of stories to tell. Public relations was also my responsibility and I almost got some of our funny stories on the Johnny Carson show. He was just about to read the remarks we had sent him when he threw them in the wastebasket. He told his producer who told me later, that computer dating services were unethical. Phase 2 was a highly ethical business and we were very disappointed. Eventually we sold the business.

We were married for 25 years when my husband came home from work unable to swallow, experiencing double vision and a myriad of other symptoms which eventually were found to be caused by Stage Four prostate cancer. Tumors in his skull were radiated and decimated. Life was stressful for me but he always was in good humor. We lived PSA to PSA. We had three young boys when he was first diagnosed. At first you say that you will never argue over petty things again but pretty soon after the symptoms subsided, we went back to a “normal life.”

About 16 years after the horrible cancer diagnosis, my husband fell, hit his head and shortly afterwards, passed away. It was amazing that he was able to live a very productive life for so many years with Stage 4 cancer.