With this month’s article, I will not be providing highlights from the February Press Club of Southwest Florida Board meeting since it has been scheduled at the very end of the month.

Instead, here is information regarding proposed changes to the Press Club of Southwest Florida mission statement. The conversations began last June at the NPC board planning retreat as a way to more directly address our role to protect journalism and free speech.

DRAFT NPC Mission Statement: Our mission is to advocate for quality journalism in all its forms—print, broadcast, and digital. We actively defend both the First Amendment and the public’s right to know. Our further goal is to support the journalists of the future through scholarships and mentoring.

Another group that advocates for a free press and the public’s right to know is the Florida First Amendment Foundation (FFAF) which was represented at one of our NPC lunch programs last fall. Their goal is to ensure that public commitment and progress in the areas of free speech, free press, and open government do not become checked and diluted during Florida’s changing times. According to FFAF, Florida has 1,122 exemptions to its open government laws currently on the books. These exemptions stand in the way of news-gathering by journalists seeking the facts and the truth. 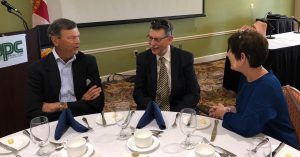 Tom Marquardt, former editor and publisher of Capital Gazzette Communications, Mike Deeson, board member, First Amendment Foundation (FAF) of Florida and Cindy McCurry-Ross, editor of the News-Press and member of the FAF board

As shared previously, with our redirected focus on defending a free press, the public’s right to know and the First Amendment, while also supporting journalists, we’ll need strategies and tactics that ensure we are clearly and diligently playing that important role in our community.

The Press Club of Southwest Florida will continue to partner with the FFAF and other organizations that share our mission. We’ve taken small steps to become more proactive and visible with our voice, including drafting a viewpoint article in the Naples Daily News in recognition of last year’s World Free Press Day. However, we have much more to do to support journalists and transparency in our local community and throughout our state.