During her presentation to the Press Club of Southwest Florida on February 7, local Author Suzi Weinert interspersed words of gratitude to a half dozen members for their guidance and support as she wrote her first book at age 75. An Air Force brat and wife of an Army general, Suzi lived all around the world, where her passion for garage sales was born out of the necessity of raising five children while trying to make every new house a home. 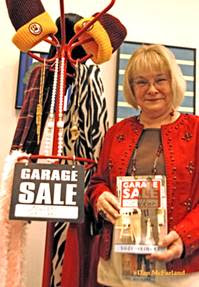 Suzi began her talk by thanking her husband Don Weinert, a retired U.S. Army general to whom she has been married for 61 years. Suzi also recognized and expressed gratitude to her sister Margo and her husband Hugh Gibbs, aunt Jean Bardonner and friends Myra Janco Daniels and Collier County Commissioner and NPC member Donna Fiala.

Suzi is a member of the Press Club of Southwest Florida, where she connected with mentors who helped her achieve extraordinary success. Woven throughout her presentation, Suzi thanked several NPC members who helped “rock the cradle” as her first book was being born. Her NPC colleagues and supporters included:
-Carole Greene, who edited all her books and served as agent with her current publisher as well as with the movie production company
-Rhona Saunders
-Karla Wheeler
-Randy Jones
-Sandy Reed
-Robin DeMattia

Suzi addresses specific issues in each book in her series, which required significant research into new topics. She carefully surrounds herself with experts to ensure not only a good story but accuracy with the story as it evolves. She used props, including a framed picture, statue and doll, throughout her presentation to show how actual garage sale items inspired her as she created the story line for each book.

Her first book incorporated a child/family abuse situation, the second book is a story about Mideast terror and her third book includes issues around aging, growing old.

From her NPC colleagues, she learned about writing styles (she chose to write short chapters), characters, settings, plots, villains, grammar and punctuation. Her other resources, such as law enforcement officers and topic experts from government agencies, helped with fact checking.

It was clear that one of the highlights in her life has been her experience with the Hallmark Channel. She talked about being invited to attend–and being treated like a celebrity during–the 2013 filming of the first Garage Sale Stalker movie in Vancouver.

Press Club of Southwest Florida is proud to call Suzi Weinert a member and we wish her success as she continues her journey to the next Garage Sale Stalker adventure.

New member George Lehner with his 60 seconds of fame

← Pheeling Philanthropic
Your Board in Action →