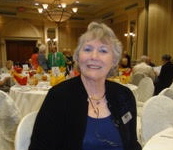 I think I know how Obama feels—at least a wee bit. I’m feeling lame-duckish. My term in office expires December 1, so any ideas that should be discussed, approved and implemented after that time will come under the auspices of the next NPC president and board. The current board has brought forward several terrific ideas, and as “immediate past president,” I will still be in a position to offer opinions. But I won’t be the executive in charge of seeing them through. See? Just like Obama.

The nominating committee has begun its work to identify, invite and persuade possible officers to be slated for our December 1 election. I appointed Rhona Saunders (Chair) and Karla Wheeler from the board. Joining them will be one person from the general membership. They selected Randall Kenneth Jones. The three have contacted several potential officers but will need a little more time to complete the slate. It is NOT too late to let Rhona know if YOU would like to take a leadership position. The club’s by-laws say the proposed slate is to be distributed to all club members no later than 25 days from the election. That will make it early November. Watch for it!

If you are reading this on October 5 and have not yet reserved your spot for tomorrow’s season-opener luncheon, you may still have time. Rhona, our liaison with Tiburon Golf Club, MAY be able to fit you in. Call her NOW at 434-9230. Then cross your fingers that she gave them a headcount that left a little wiggle room. You might be able to wiggle your way in! Same pricing as last season: $30 member, $40 all others except students, $10.

Four amendments to the Florida Constitution will appear on this fall’s ballot. A forum to explain them and answer questions is set for October 10, 6:00 to 7:30 at the Norris Center. I will represent NPC and introduce the forum. It’s a chance to let those in attendance know a little about our wonderful club. I invite you to attend, too. Maybe you’ll be more interested if I tell you one of the amendments is to approve medical marijuana!

The 20th anniversary committee is working hard to make our December 1 annual meeting, election and CELEBRATION a not-to-be-missed event. I don’t want to give away any of the surprises, so I’ll just say come and be prepared to rejoice that YOU are a member of this truly awesome (and I rarely use that word) organization.

As we neared the close of our September board meeting, Soni Dimond received word that her mother had closed her eyes for the last time. Her Greek Orthodox priest was holding her hand and singing hymns to her—a beautiful departure for Soni’s mom. The club has made a donation in her mother’s honor, but I’m sure Soni would find comfort in your words of friendship and condolence.

That’s it from me for this issue. The clock is ticking!