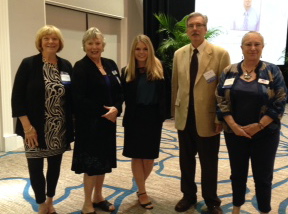 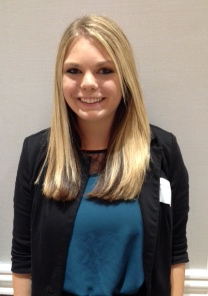 Sinclair is our chosen recipient of the NPC Endowed FGCU Foundation Scholarship for the 2014-15 academic year. A graduate of South Dade Senior High School in Homestead, Fla. Sinclair is a sophomore, majoring in both journalism and communications.

During the luncheon Sinclair said, “I love the Journalism Program at FGCU. I have learned so much from Prof. Judd Cribbs (Assistant Professor of journalism).” She explained that her most favorite thing is the behind-the-scene camera work she does for ESPN3 during the video taping of various sporting events at FGCU, unless there is some sort of technical glitch. If that happens, she said, her director starts yelling at her through her headset. “That’s stressful,” she said.

She’s just starting to explore the various opportunities in the field of journalism and hopes that she’ll have more hands-on experience in other areas of her career choice, maybe some of that through internships. In high school Sinclair was the production manager of the high school TV Production team and the copy editor of the yearbook/newspaper staff. Sinclair’s brother is working in the film industry, and that interests her, as well.

Her goal is to graduate with as little debt as possible, and her scholarship awards, like our NPC one, are helping her do that. Sinclair is also on Dr. Wilson Bradshaw’s “President’s List” Honors Program for her academic achievements; she currently has a 4.0 GPA.

The Hyatt Regency ballroom was filled with 650 attendees, both scholarship students and scholarship donors and sponsors. For the 2014-15 academic year 1,100 students were awarded FGCU Foundation Scholarships totaling over $2 million; there were 4,200 students who applied for those Scholarships. Christopher Simoneau, Executive Director of the FGCU Foundation, reported that there is now more than $77 million in its Endowment Program.