Ninety members and guests at the May 22 luncheon at the Hilton-Naples met six of the eight NPC scholarship students. First, the two who graduated from college this spring were honored. Andrew Friedgen, a Journalism major at FGCU, gave a brief presentation thanking the Press Club of Southwest Florida for its support during the past two years. He told the group about some of his experiences as a student in the FGCU Journalism program and mentioned that he will soon depart on a road trip to California to celebrate his college graduation. The other FGCU J-student graduate, Mary Castro, was not able to attend. Both of them will receive a 2014 Associated Press Stylebook as a graduation gift from the Press Club of Southwest Florida.

A special treat for those in attendance came when two of the three new Terrence J. Miller $1,000 Renewable Scholarship recipients received their award certificates instead of receiving them at their high schools’ May 19 award nights. Sarah Grace Davenport (Golden Gate High School-2014) and Melissa Gomez (Lely High School-2014) were presented their 2014-15 scholarship certificates by Scholarship Committee member Connie Kindsvater. Sarah Grace, a Collier County Graduate of Distinction, is enrolled at FGCU and plans to major in Journalism. Melissa, a Collier County Winged Foot Scholar-Athlete, is enrolled at the University of Florida in its Innovative Academy program. She also plans to major in Journalism.

The third new NPC 2014-15 scholarship student, John Marshall Wix III (Golden Gate High School-2011), was not able to be in attendance. A Journalism major, he is entering his junior year at FGCU. 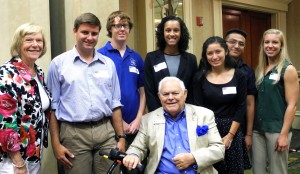 ← NPC Book Beat
Your Board in Action →