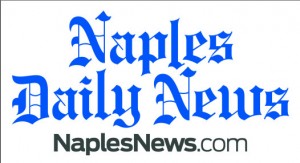 “The sheer number of awards speaks to the level of talent and commitment of our community team,” Daily News Executive Editor Manny Garcia said. “Our No. 1 goal is to serve our readers — so to be recognized with these awards is doubly satisfying. We could not be prouder of their success.”

The awards were handed out at the organization’s banquet Saturday evening at Pirate’s Cove Resort and Marina in Stuart. This is the 63rd year of the Florida Press Club contest.

Haberkorn took home the most awards, receiving a total of seven, including sweeping an entire category. They were for dozens of his designs featured in the Daily News’ community publications, including the Citizen, The Banner and Marco Eagle.

Haberkorn entered numerous pages into the contest, most notably his painting of the Naples Pier done in the style of the famous block print by Katsushika Hokusai that graced the community publication covers for the 2014 hurricane season coverage.

The Lucy Morgan Award is named after a former Tampa Bay Times Pulitzer Prize-winning reporter who still writes occasional columns. The award was presented to the Citizen’s editor, Jay Schlichter, who wrote a collection of five stories about the Collier County Honor Flight’s mission to recognize and thank World War II veterans for their service by flying them on a one-day whirlwind journey to Washington, D.C., to tour the national war memorials erected in their honor. The stories were published in April and May 2014.

In addition to the Lucy Morgan Award, Schlichter and freelance reporter Kelly Farrell took third place in the Minority Reporting category for a January 2014 article about what people, businesses and organizations were doing to honor Martin Luther King Jr. for the annual MLK Day of Service.

The Banner’s editor, Elysa Delcorto, and reporter Tracy Miguel-Navarro received second place in the Religion Writing category for an article about Las Posadas, a nine-day celebration that represents the nine-month pregnancy of Mary carrying Jesus.

Brandi Broxson, editor of The Journal, a monthly community publication, received first and second place in the Travel Writing category for her June 2013 article about staycations and how people can get away for every budget and time frame.