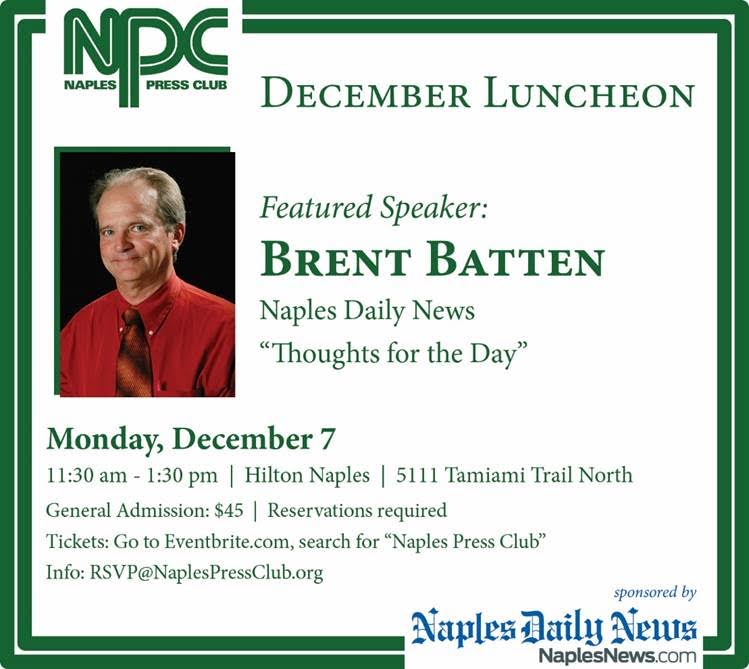 Brent Batten was born and raised in Central Ohio where he graduated from Ohio State University with a degree in journalism. He joined the staff of the Naples Daily News in 1985 as the police reporter. He has also served as the paper’s court reporter, Lee County bureau chief and city editor.

He began writing a regular column for the newspaper in 1997. His column appears three times a week. He has received awards from the Florida Press Club, the Florida Society of Newspaper Editors and the Society of Professional Journalists. He was named best newspaper columnist by Gulfshore Life magazine in 2002 and in 2009 was recognized in the Best of Scripps competition. He was a finalist for the 2012 Bastiat Prize for Journalism sponsored by Reason Foundation.

He lives with his wife, son and collection of rescue dogs at a secure compound in Golden Gate Estates.

This is also the Press Club of Southwest Florida Annual Meeting (with elections of officers) and the Annual Holiday Party.

The reservation deadline has passed, but please phone Rhona at 239-450-1215 to see if you might take the place of someone who had to cancel.

← Your Board in Action
An elephant in the room →