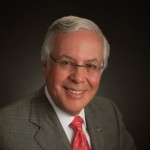 Those are the places our new Press Club of Southwest Florida member Arnold Klinsky lived before becoming a Florida resident this past spring. With vacation trips to Pelican Bay for the last 15 years, Arnold has now decided to make Naples his new home. He brings along a life full of family, success, and a desire to explore what this “small town with big city attributes” (Arnold’s impression of Naples) has to offer.

When asked about the highlights of his career, he simply stated that they were all highlights to him, including  the following tales of professions and achievements: television reporter, producer, winning a regional Emmy as a television news director, and managing the NBC affiliate in Rochester, New York for 28 years.

Arnold also noted another career highlight–his induction into the New York State Broadcasters Hall of Fame alongside fellow NPC member, Phil Beuth. “The highlights really are the people with whom I worked and how they developed in the industry. Also my involvement’s in Rochester’s non-profit community.”

Arnold plays a strong role in the Naples community as well. He is a member of the Rotary Club of Naples, enjoys emceeing and auctioneering at local fundraising events, and has also publicly spoken here in town.

“(I) would like to reinvent myself in my new life, and do more interesting things here in Naples,” Arnold said.

He also referred to his NPC membership as an “opportunity to meet people with common interests in my community.”

Well, Arnold, you have definitely come to the right place.