In the April 27, 2020, edition of the Naples Daily News, there was a large paid advertisement carrying the headline, “Demand Soars for a New Pill That Promises to Ward Off Illness.” 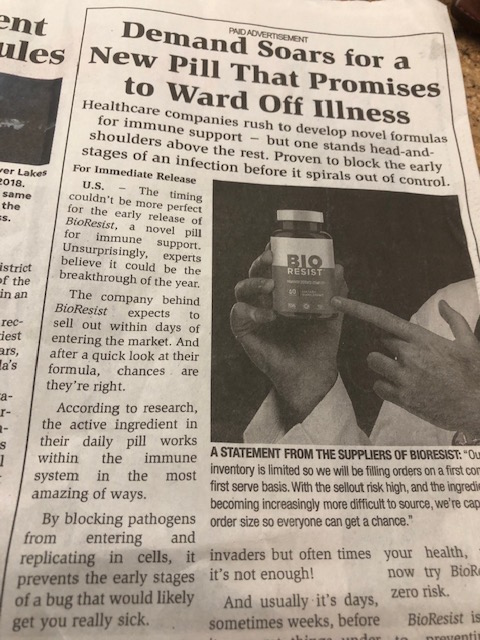 A few quotes from the ad include:

“The timing couldn’t be more perfect for the early release of BioResist, a novel pill for immune support. Unsurprisingly, experts believe it could be the breakthrough of the year.”

“It contains compounds called Beta Glucans, which increase blood cell counts in the body. This is vital because white blood cells are your front line defense against the most serious pathogens.”

“It has been shown to reduce symptoms of upper respiratory infections, helping users regain control of their breathing.”

“BioResist is the secret to preventing serious health threats before they start.”

“If you want to quickly protect the most important aspects of your health, you can try BioResist with zero risk.”

The ad goes on to state, “The company has decided not to sell their formula in stores at this time due to the current situation.”

In small print at the bottom it says, “These statements have not been evaluated by the FDA. This product is not intended to diagnose, treat, cure, or prevent any disease.”

While this ad is not journalism, our local daily paper should not be running it, in my opinion. As Vice-President and General Manager of the NBC TV station in Rochester, New York, I would have been open to strong criticism — or worse — for accepting this as a TV ad.

Do you have an opinion piece you’d like to share in a future issue of Scoop? Just email Mark Young, our communications chair, at mark.young@bellsouth.net.