“It’s not about abortion, it’s misogyny in its worst form.”

Before assuming a career with Planned Parenthood, Barbara, a graduate of the University of Pennsylvania and a psychiatric nurse, moved to the position of head nurse in Manatee County and then to a hospice in Key West. She has directed Planned Parenthood in Florida for more than 20 years and, since its merger in 2015, is responsible for a staff of 176 in 12 centers, caring for over 40,000 patients. Acknowledging “How to weather the future” as their biggest concern, she first outlined a little of their past. 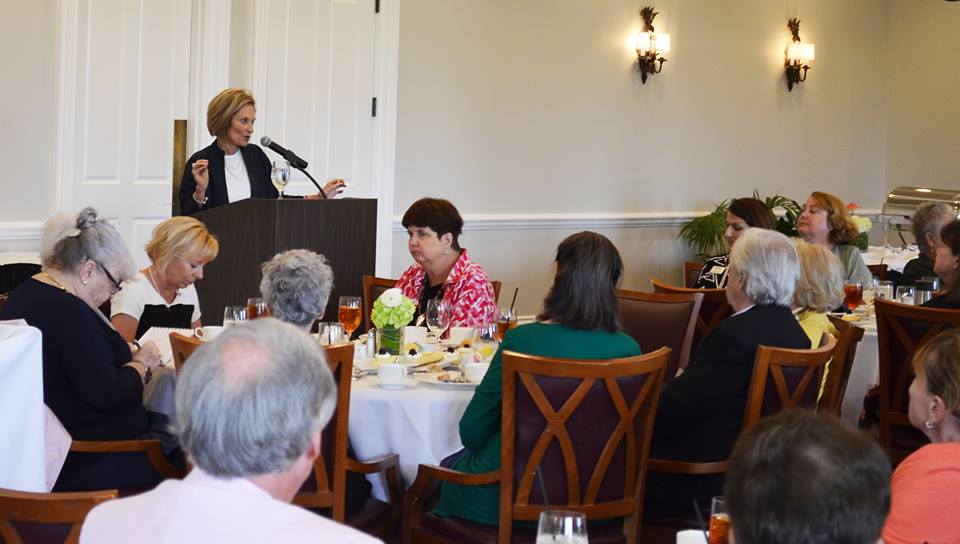 It has been 100 years since Margaret Sanger began assisting women with family planning in Brooklyn, and went to jail for it. And here we are 100 years later – “Will I go to jail?” Barbara wondered aloud.

Planned Parenthood is in every state and is international as well. Twenty years ago there were over 200 affiliates but since the Affordable Care Act, facilities no longer have to be in nondescript little houses. With increasing competition, medical files had to be integrated electronically and serious upgrades put in place.

“We are a three-legged stool,” Barbara said, “healthcare, education, and political.”

Although one in five American women makes use of Planned Parenthood’s services at least once in a lifetime, the organization has always been a target and has been persecuted politically by domestic terrorists as well as mentally disturbed people. And now by Congress and the Senate. Some of the many services Planned Parenthood provides to women are lifesaving cancer screenings, birth control, prevention and treatment of sexually transmitted infections, breast health services, body image counseling, emergency contraception (morning-after pill), pregnancy, relationships, sex and sexuality, gender issues, as well as men’s sexual issues. Barbara estimates that of the 75% of the medical issues they see, 90% are preventive. She is committed to ensuring that those services continue in spite of threatened government funding cuts, knowing that, without Planned Parenthood services, thousands of women and men will be without much-needed health care. This is frightening, she said, when we consider that the United States has the largest rate of infection in the industrial world.

Since the Affordable Care Act, Barbara said that both teen births and abortions are at the lowest rate ever, as women have had access to good health care and counseling. She noted that, historically, women’s health issues gained some attention under the Nixon administration, but there was some “chipping away” of women’s rights during the Reagan years. After Roe v Wade in 1973, everyone took a breather until now, as people became complacent and didn’t vote.

A woman’s basic right, she stated, is her right to control her own fertility/reproduction, and it took this general election to highlight its importance with threats against these rights. Protest marches across the United States showing people’s support and awakening the government to women’s voices continue. Of the calls to Congress, 89% are made by women. Eighty percent of Americans polled believe that Planned Parenthood should continue to receive government funding.

“The government is hell-bent to take us down,”  Barbara stated. “It’s not about abortion, it’s misogyny in its worst form.”

In Florida the care of many patients is billed to Medicaid. If this goes away, Barbara warned, thousands of women won’t be covered and we’ll become “just like Texas—abysmal—with statistics worse than Africa. Is that where we want to go?”

In Collier County, unable to care for impoverished women, the Health Department turned over its female cases to Planned Parenthood for a fee of $100,000 per year.  If this funding is cut, Planned Parenthood can no longer afford to care for these women, and the County will be obligated to take them back. However, they simply do not offer the needed services.

“We need to stay afloat in Florida,” Barbara said. “But we are fighting against mistruths and false allegations. We need to expand our services, not just birth control. We need to be there to assist women with subsidized care. We need to raise $6 million from the private sector just to keep our doors open. Unlike other facilities, we are open evenings and weekends. Women cannot wait for services.”

Legislators, she observed, seem to deal with it as a matter of faith rather than law. Again, she encouraged people to stay informed and vote.

It was pointed out that in Florida only 18% of elected officials are women.

Some of the audience’s many questions for Barbara:

Q – Would the Bill and Melinda Gates Fund help?
A – The Gates Fund assists federal funding in Africa. Melinda Gates’ religion might preclude helping Planned Parenthood. In addition, it’s not possible to replace the $500,000 needed each and every year.

Q – What happens if Governor Rick Scott runs for Senator Bill Nelson’s position?
A – So far Scott has not declared – it’s just speculation, although he seems to be building his war chest.

Q – What will happen if Neil Gorsuch is appointed to the Supreme Court?
A – No one is sure how he would vote [on abortion cases].

Q – In Denmark, condoms are supplied to high school children. What would happen if this were suggested in the US?
A – There is no law about it in Florida, where every school district is different. We cover 22 different districts. We go into schools only at the invitation of the teacher. We tell students condoms are supplied free at Planned Parenthood and we give them the address. They should be supplied free not only in high schools but in middle schools, as well as access to preventive care. In addition, the morning-after pill should be part of every home pharmacy.

Q – How many women get pregnant and how many choose abortion?
A – In the US, half of the pregnancies are unintended. One woman in three will have an abortion in her lifetime. Medically, it’s a safe and easy procedure, although not always mentally and emotionally. Since 1973 the numbers have gone down. Last year in Florida there were 75,000 abortions and many more births.

Q – Is abortion counseling available after as well as before the procedure?
A – Everyone is given options. When they come to Planned Parenthood, 99% have already decided. If they are not sure, we send them out for counseling.

Q – What about the move to legitimize crisis pregnancy centers?
A – These centers are staffed by non-medical people who do not believe in abortion. They are funded by the Choose Life license plates and offer no assistance after the baby is born.

Q – How does the attitude and support of today’s youth compare to those in the 1970s?
A – Bernie Sanders reawakened younger people to American policies. We bring groups of young people together in large cities. We have chapters in colleges such as FGCU. We do research with them, such as for the ZIKA virus in Immokalee. We do training in medical schools, with nurse practitioners, ultrasound students. We invite people to visit our facility on Creech Road in Naples at any time.

Q – What kind of support do you give to the African-American community?
A – For a long time we were viewed as a privileged white women’s organization. We strive to be inclusive with minorities. We are not there yet but in the last five years we have opened up and made a big difference.

Q – It is said Margaret Sanger gave her husband a choice, birth control or “no sex.”
A – Whatever it takes!