Recently I was afforded the honor to speak at the prestigious Chautauqua Institution in upstate New York.

As a member of the Chautauqua Literary and Scientific Circle (CLSC), I was invited to make a presentation for their weekly Eventide program. The topic of my presentation was the National World War II Museum in New Orleans. The museum, which was established in 2001, is a tribute to the valor, courage, and commitment of the American people to combat and defeat a common enemy. 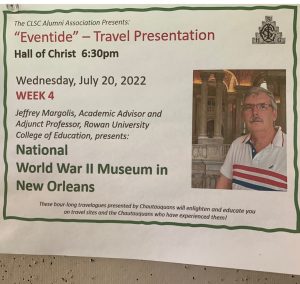 Originally the museum was to be a D-Day Museum but grew to encompass all of the American efforts during the war. The city of New Orleans was selected because it was the home of Andrew Higgins, president of Higgins Boat works, the company that built the landing craft for the Normandy Invasion.

The Chautauqua Institution was established in 1874 as a summer retreat for Methodist Sunday school teachers and has become a premier venue for intellectual discourse and cultural expression. Each summer, The Chautauqua Institution presents a nine-week convocation of civil discourse with a central theme for the season. There are sub-themes that are offered each week that are related to the main theme. The theme of the week that I spoke was “The Future of History.”

The Chautauqua Institution is located on pristine Chautauqua lake in the mountains of western New York. It is located about a two-hour drive from Buffalo and about an hour from Erie, Pennsylvania. The Chautauqua Literary and Scientific Cultural Circle is the nation’s oldest book club. It offers a curated list of over 900 books on a wide variety of topics.

Member Musings is a column in SCOOP where we invite you, our members, to share your experience, insights, and opinions. Send your article/photo to info@pressclubswfl.org.