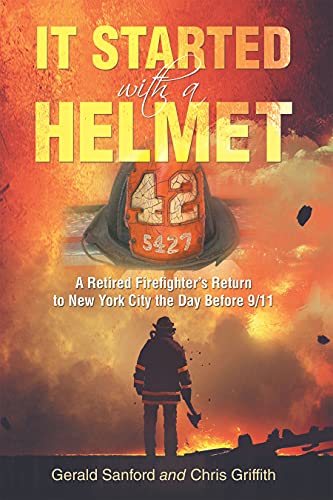 In his recently published book, “It Started with a Helmet,” author Gerald “Jerry” Sanford reflects on his unsuspecting trip to New York on Sept. 10, 2001, to reunite a Bronx firehouse with a relic from the past only to witness a national tragedy unfold the next day and his resolve to return to the Fire Department of New York (FDNY).

As the nation marked the 20-year anniversary of 9/11 last month, many Americans reflected on their experiences in the wake of this national tragedy and documented them for the generations to come.

In their debut book, “It Started with a Helmet: A Retired Firefighter’s Return to New York City the Day Before 9/11,” authors Jerry Sanford and Chris Griffith share the gripping account of Jerry’s selfless contributions while volunteering with the FDNY during the aftermath of the September 11th terrorist attacks and preserving the legacy of Sanford’s many friends and former co-workers who heroically sacrificed their lives that day.

“It Started with a Helmet” reflects on Jerry’s 29-year career with the FDNY after which he retired and moved to Naples. But his retirement was short lived, and he quickly began working for the North Naples Fire Control and Rescue District as Public Information Officer. In this role, he came across an early 1900s antique leather fire helmet. Wanting to reunite the helmet with the firehouse it originated from, Jerry coordinated a presentation ceremony, scheduled for Sept. 10, 2001, to return the historic keepsake to its rightful owners – Ladder 42 in the Bronx. Many people who attended the helmet presentation tragically died the next day.

As Jerry and his traveling companions headed back to Florida from New York on Sept. 11, 2001, the terrorist attacks were already underway. His group landed for a plane change in Pittsburgh and saw the horrific events unfolding live on the airport televisions. After making it home, Jerry quickly decided he needed to be back in New York and volunteered to serve the FDNY in one of his former roles as press secretary. With the city in ruins and the fire department in disarray after losing 343 brave men that day, Jerry got to work on the grim tasks of planning and attending funerals for his friends and brothers while also trying to organize the chaos. 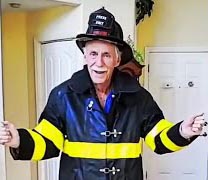 “It Started with a Helmet” is a powerful memoir that twines Jerry’s rare ground-level perspective with important historical information that serves to educate the public and keep those who tragically lost their lives in the minds of generations to come. His book also shares his experience battling lung cancer – an after-effect many surviving 9/11 first responders have battled – as well as his continuing work to honor those who died by helping to establish the Freedom Memorial in Naples. Jerry was recently on the popular firefighter podcast, “Gettin’ Salty Experience,” which can be viewed here.

In a recent interview with the Naples Daily News, Jerry said he and his co-author had two main hopes when deciding to publish the book on the eve of 9/11:

“Never Forget…this is a must read for first responders, family, children, educators any and all who remember this horrific tragedy,” a reader wrote in a five-star review of the book on Amazon. “An incredible story that will bring uncharted emotion.”