Joel Banow, a Press Club of Southwest Florida member who experienced an Honor Flight trip to Washington, DC, last fall, and Jerry Godbout, a World War II Veteran who was scheduled on the Honor Flight on May 5, were among the panelists for the lunch program on May 3. Joel opened the program by showing a video montage of his Honor Flight. 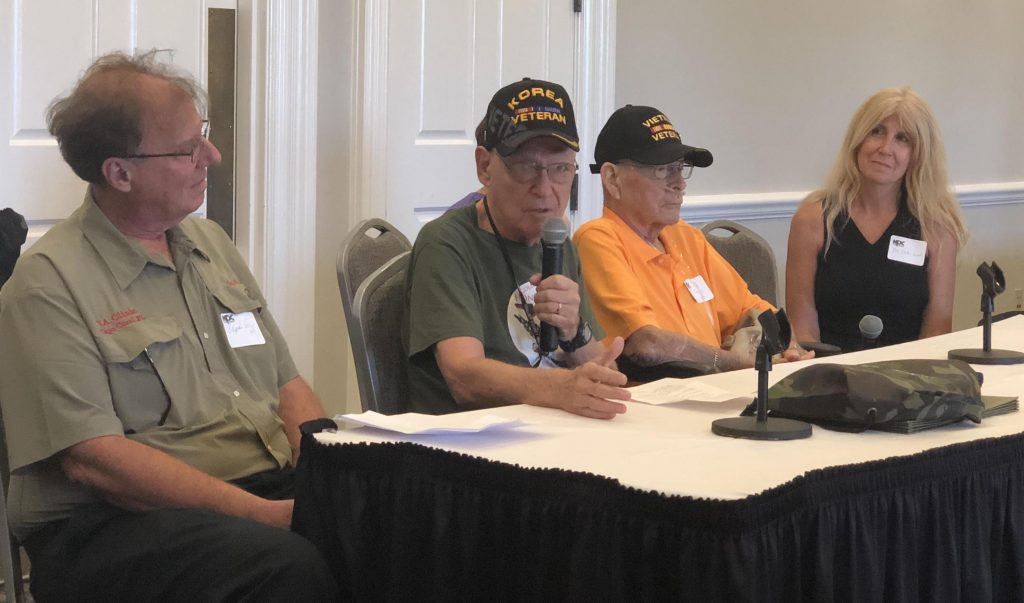 The first presenter, Dr. Debi Lux, is a retired dentist who, along with her husband, started the Honor Flight program in Collier County in 2013. She explained that there are now 130 such programs across the county. Both men and women qualify for the program, which is a 501(c)3 and is run entirely by volunteers. There is no charge for veterans. Donations to the Honor Flight cover their expenses. Collier and Lee County veterans and their guardians were scheduled to leave on the 16th flight out of Fort Myers on Saturday, May 5. While priority is given to World War II Veterans, veterans of the Korean and Vietnam Wars are also being invited, if there is room.

Joel, a Korean War Veteran, was emotional as he described his trip last fall as an experience he will never forget. They were constantly on the move, from very early in the morning, until they returned to Fort Myers at 9 p.m. Saturday night. He was especially impressed with the police escort from the Naples Airport, where they parked, to Southwest Florida International Airport, where the charter flight picked them up, and again in Washington, DC, from the airport to the monuments. Joel also expressed appreciation for the breakfast, lunch, dinner and snacks provide throughout the day. Each veteran traveled with a guardian. These individuals transported veterans by wheelchair (mandatory) from monument to monument and made sure their charge was hydrated. Joel and the other veterans found the roll call on the bus humorous and a reminder of their days in their military units. He was smiling as he recalled that he received more handshakes and kisses on the check that day than he had ever experienced previously in his life.

Jerry received word that he would be included on the Honor Flight just a few days prior to the Press Club of Southwest Florida presentation. He said it was an unbelievable honor, he felt overwhelmed and proud to be an American. Jerry’s guardian, Peggy Post, attended the lunch out of interest and was surprised to actually meet the veteran she would be escorting on Saturday.

Dr. Stephen Wener, who recommended Jerry for the upcoming flight, talked about his role as a physician with the Veterans Affairs Clinic in Cape Coral. He is honored to participate on each of the Honor Fights. Sometimes as many as 10 of the veterans on a flight are his patients. Dr. Wener provided a “Top 10” list of why he is involved with the Honor Flights.

10. The box lunch, the snacks, the breakfast—yes, the food keeps coming all day long.

9. Everyone feels so connected and quickly become friends. It should be noted that the guardians, who take care of the veterans all day long, pay their own way with a $450 tax deductible donation to the Honor Flight of Collier County.

8. The “hair-raising” police escorts and the water cannons at the airport are exciting and memorable.

7. The politicians you meet on each flight, including Congressman Francis Rooney. Dr. Wener also met Robert Boll, chairman of the World War II Monument, who is now in his 90s. He shakes the hands of each and every veteran. He’s proud that the monument was built on time and on budget with private funds—without any federal money.

5. As an immigrant from Canada, Dr. Wener participates in these flights as his way of thanking the United States for what he has become and what he has been able to do with his life.

4. The flights help Dr. Wener fight burnout in his medical role. He is able to help veterans with an experience they will never forget, which he finds rewarding.

3. For many veterans, this is the highlight of their year, even among the highlights of their lives. They receive hugs and kisses from professional cheerleaders and U.S. citizens, bringing them joy throughout the day.

2. The reception at the Fort Myers Airport when the veterans return home is unbelievable. Hundreds of people turn out, along with bands and bagpipes, even though it is 9 p.m. on a Saturday night.

1. It is fun. It feels good. These events give Dr. Wener, the guardians and others a chance to recalibrate and realize what is important in life.

Two Honor Flights are scheduled for fall. Mission 17 will depart on September 29, and Mission 18, which is being sponsored by former Senator Garrett Richter, will depart on October 20.

What can you do to support the Collier County Honor Flight? If you know a veteran who may qualify for an upcoming flight, be sure to help them contact the organization and submit an application.

In addition, donations to support future flights are appreciated. Also, invite representatives from the Honor Flight to speak to any groups you belong to and talk it up in the community—among your family members, neighbors and friends. Finally, if you are available on September 29 or October 20, plan to be at the Southwest Florida International Airport at 9 p.m. to greet the veterans and their guardians when they return from Washington, DC.

For more information, go to collierhonorflight.org.