September 11, 2001, was a beautiful, sunny, and clear day. It was a warm day for September but not unusually so in Washington, D.C.

That day, however, would become a defining moment in world history.

For me, as managing editor of The Hill weekly newspaper, which covered Congress, what was most important was that it was a Tuesday and Tuesday was deadline day. It was when we paginated the paper, decided on story placement, and our very young reporting staff filed their copy for editing, copy-editing, layout, and proofing. We had to get it all out the door and to the printer by 6 p.m. sharp. Tuesdays started very early, ran very late, and were frenetic. 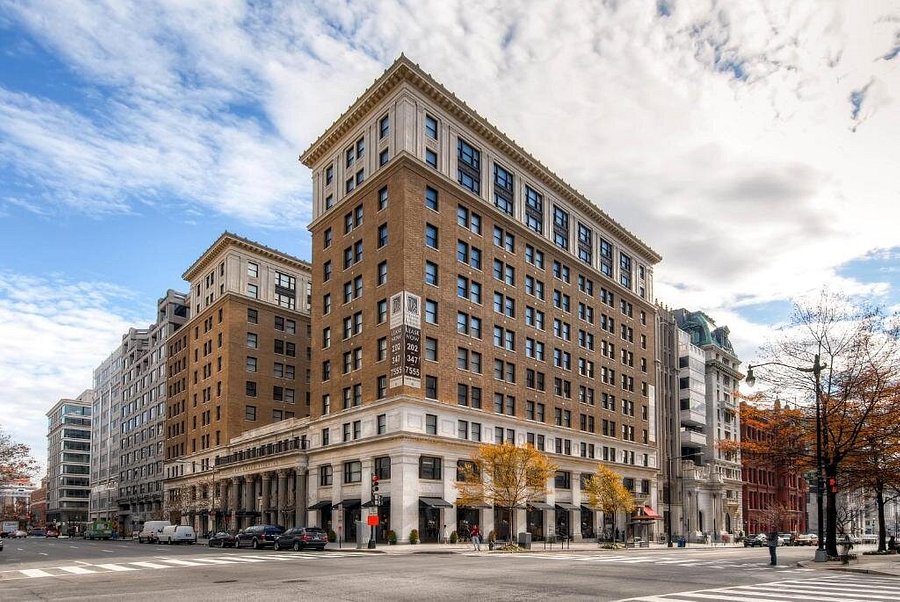 We were on the top floor. The intersection is where I thought cars had collided when we heard Flight 77 hit the Pentagon.

We worked in a cramped and dingy newsroom on the 10th floor of the Woodward Building at 15th and H streets in downtown Washington, D.C, which was closer to the White House than Capitol Hill.

A television, which was always on, sat on a shelf overlooking the newsroom, and it was there that we first learned that a plane had flown into a tower of the World Trade Center in New York. It was a terrible disaster but not our story—we had to concentrate on getting our work done on Congress. I insisted everyone keep working on their stories, and I kept the sound muted on the television.

Some staff wanted to see more about the World Trade Center so they went into a conference room with another television to watch there. After a while they came rushing out, some screaming, their eyes wide with horror—a second plane had crashed into the second tower of the World Trade Center.

It was clear that this was no accident but a deliberate terrorist attack. “That’s Al Qaeda,” I said, having covered Middle East policy and defense. My boss, a former New York Timesman in his 70s and now Editor-in-Chief, said it was the first time he’d ever heard the name.

Our senior staff convened in his office to decide what to do. It still wasn’t our story but I thought the reporters could get reactions from members of Congress, especially those from New York. Otherwise, we had a number of possible front-page stories, all focused on political action committees (PACs): the Congressional Black Caucus PAC, which might have violated campaign finance laws; actors Warren Beatty and Annette Bening launching a Progressive Majority PAC; or the conservative Club for Growth targeting moderate Republican members (nothing’s changed there!).

While we were meeting, we heard a thump that was half boom and half crunching metal. “What was that?” asked the office manager. I thought cars had collided in the street below and went to the window to look for an accident in the intersection. 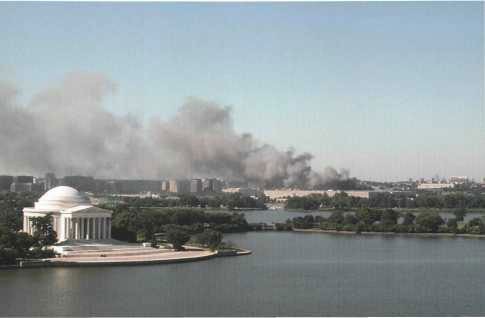 The Pentagon seen from across the Potomac. While our vantage point was somewhat different and more distant, it gives a sense of what it was like to see the attack that morning.

In fact, American Airlines Flight 77 had just flown into the Pentagon.

Thus began a day of cascading rumors. The first was that a bomb had gone off at the Old Executive Office Building (EOC), and it was on fire.

Well, that was easily checked out. I took an intern with me onto the roof of our building, climbing the stairs past the old, wheezing elevator machinery and onto an asphalt roof full of broken glass and junk. The day was so clear and bright we could look past the Washington Monument and across the Potomac and see a dense plume of black, oily smoke rising from the Pentagon. The intern gasped. “That’s some fire,” I said. However, the EOC was alright.

We went back downstairs. CNN was reporting a bomb had gone off at the Pentagon and the World Trade Center had been attacked by terrorists. Looking out from the roof again, we could see streets being closed off and the Treasury building and White House staff evacuating.

As more news came in along with the rumors, there was real fear and some panic among staff and management. Everyone gathered in the well of the newsroom. Our Editor-In-Chief wanted to cancel that week’s edition. There was talk of closing the office. One young reporter was crying and saying, “I’m not going to die for this newspaper!” Other reporters wanted to flee. One of our two production directors looked like she would be sick.

To me, not publishing was unthinkable.

“We’re journalists,” I said to the staff and managers. “It’s at times like these, when things are most uncertain, that we provide our greatest service, and people look to us for our coverage. We have even more of an obligation than usual to our readers and our advertisers and ourselves to report what’s going on. We’re going to report this story and we’re going to come out with a newspaper tomorrow as scheduled. Putting out a newspaper is what we do.”

I was well beyond my authority as managing editor to announce this as a decision but the Editor-in-Chief didn’t contradict me.

So I took the next step and started giving orders. I sent the reporters to the Hill. Some grumbled but they went. The Editor-in-Chief started making preparations for a long siege. The office manager went to a snack bar in the lobby and bought all the provisions she could in case we were trapped inside the building. People started taking the initiative. An ad saleswoman volunteered to do reporting, saying, “I want to be part of this.”

When anyone questioned what we were doing, I responded, “We are going to produce this paper.”

And we did. I handled all the details, from getting copy to trying to get photos (we were still using film and couldn’t reach our developer—we ultimately used an editorial cartoon on the cover), to supervising the evacuation of our building when we were ordered out, and then overseeing the movement of our operations south to our printing plant in Springfield, VA.

We published and distributed on time. The edition that emerged wasn’t our most polished but it reported the biggest story of the day—indeed, of the decade—to our congressional readers.

After that day, I devoted myself to covering the terrorist threat. I left The Hill and in 2004 I was founding editor of the monthly magazine Homeland Security Today, which covered the emerging discipline of homeland security in all its aspects. I worked there until moving to Naples in 2013.

September 11, 2001, was a tragedy, a challenge, and a declaration of war against freedom, civilization, and the United States.

But personally, I consider that day to be the peak of my professional career. I felt as though all my experience had placed me there, in that position, for precisely that moment—and I ultimately believe I performed as required. Ever since, I’ve tried in my own small, personal way to preserve, protect, and defend everything that was threatened that day: our lives, our liberty, and our Constitution.

It also solidified in my bones what I had only vaguely known before: that journalism is a calling and a mission and a sacred trust that must be honored if people are to know the truth—because only the truth will keep us free.