The next Press Club of Southwest Florida Roundtable segment will focus on the controversial topic of guns in the U.S., and you are invited to join us on Zoom for the interview tapings. We’ll be discussing the recent spate of mass shootings, the fight over gun rights and regulations, and where the debate goes from here.

On Thursday, April 29, at 1 p.m., we will interview Luis Valdes, the Florida State Director for Gun Owners of America. A former police officer, Valdes believes the Second Amendment cannot be restricted in any way – that gun ownership is an inherent right that is constitutionally protected. He says people who use firearms to violate the law should be fully prosecuted, but he adamantly opposes broad-based restrictions that limit the rights of law-abiding gun owners. To attend the taping of this interview, email boborr21@gmail.com, and he will send you the Zoom link. 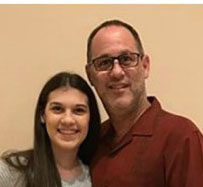 Then on Friday, April 30, at 1 p.m., we will interview Fred Guttenberg, a gun safety advocate who lost his daughter Jaime in the Marjory Stoneman Douglass High School shootings in February 2018. A former businessman from the Miami area, Guttenberg adopted gun safety reform as his life’s mission following the death of his daughter and 16 others in the Parkland, FL, shootings. Shortly after the shootings, he helped lead the fight for gun safety changes in Florida, which resulted in the state legislature raising the age for gun purchasers to 21, banning so-called bump stocks, and enacting a three-day waiting period for all gun sales. It was the first significant gun reform in Florida in 20 years. Email boborr21@gmail.com if you’d like to attend the taping of this interview, and Bob will send you the Zoom link.

When you join us for a live taping, you become part of the “gallery,” with the potential to ask questions of our featured guests following the interviews conducted by our Press Club panelists. As always, the upcoming Roundtable segment will be shared on the Press Club’s YouTube channel.