A panel of veteran journalists from the Press Club of Southwest Florida recently interviewed Bill Barker, the past President of Gannett Southeast newspapers, which include the Naples Daily News and the Fort Myers News Press.

The topic was the future of local news in this era of media consolidation and staff cutbacks. Barker offered insights into industry trends, challenges, and coverage philosophies. 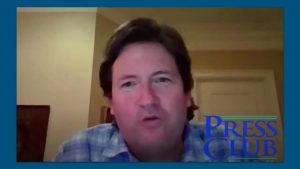 Barker is upbeat about the future of newspapers. He says that local news needs to stay relevant to its audience with aggressive reporting and investigative projects, even if those articles don’t necessarily attract broad readership.

He notes it is not enough for a reader to call with a complaint. Instead, he believes the reader needs to become part of the solution in tackling common community concerns.

Despite the fragmenting of the audience, Barker says people still depend on local news.

In commenting on Barker’s emphasis on the importance of aggressive investigative reporting, Press Club board member Laura Greanias, Florida investigations editor for the USA TODAY Network, pointed to a story that was recently published in the Tallahassee Democrat (and posted to the Naples Daily News and Fort Myers News Press) about four new police reform bills that have been introduced in Tallahassee. Click here to read the article. The need for this police reform was uncovered in a series of articles researched and written by Greanias’s investigative team.

← Future of Local News Roundtable Feb. 9  — Please Join Us!
Your Board in Action →