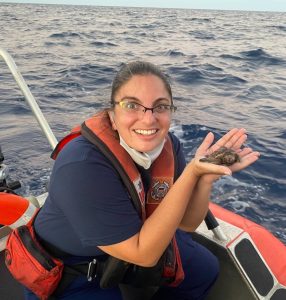 Nicole Groll (Palmetto Ridge HS, USF graduate 2012) joined the U.S. Coast Guard after her graduation from USF and became a Communications Specialist. In December 2020 she received a special award for her initiative, tenacity, diligence and public awareness efforts in her role as Public Affairs Specialist. She was praised for using her communication skills to prepare information on the “life-saving tool of 911 to increase the awareness of the public in boating and sea incidents.”

Nicole’s award was communicated to the public by ABC-TV News, the Associated Press, the Boston Herald, and other news outlets. Her “Life-saving tool of 911” was featured multiple times to 100 million people, saving the USCG $2 million in advertising cost to get that same information out to the public. At the same time the award was presented, Nicole was also promoted to E-6/First Class Petty Officer. She is currently based in the Boston area, but has requested a transfer to the Miami USCG base.