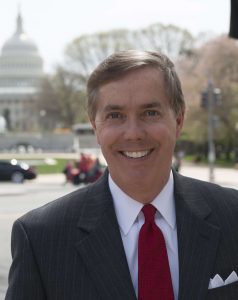 Steve Scully, Senior Executive Producer and White House & Political Reporter with C-Span, will discuss his views about the presidential debates at a special press club “newsmaker” virtual event at 6 p.m. Tuesday, Oct. 20. Scully is the moderator for the second of three presidential debates of the 2020 campaign.

Scully joined C-Span in 1990 and currently oversees a team of field producers responsible for the network’s ongoing coverage of the White House and politics. He has interviewed every U.S. President since Gerald Ford, as well as numerous world leaders. He served nine years on the Executive Board of the White House Correspondents’ Association. Cablefax magazine listed him as one of Cables’ 100 “Heavy Hitters.” New York Newsday listed Scully as one of the media’s most influential movers and shakers in political programming. C-SPAN’s campaign coverage earned the network an Emmy, Peabody and Golden Ace Award. In May 2019, the Pennsylvania Association of Broadcasters inducted Scully into their Television Hall of Fame.

“It is indeed an honor to be asked to moderate one of the three presidential debates of the 2020 campaign. It is also an important responsibility,” says Scully. “In the final weeks of this historic campaign, this unique ‘town hall’ format will allow the American people to ask questions directly to the debate participants — the candidates vying for our nation’s highest office. The questions will come from undecided voters selected by the Gallup Organization and from social media. My focus is to effectively facilitate this important conversation between voters and the candidates.”

The public is invited to attend this Zoom event. Reservations and advance payment are required. The cost to attend is $10 for press club members and guests. RSVP and pay your $10 attendance fee by Friday, October 16, through this Eventbrite link.

Our thanks to longtime press club member Arnold Klinsky for arranging for this timely newsmaker event.