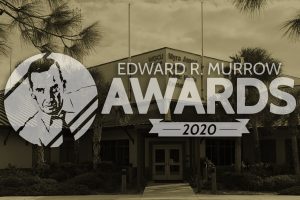 Regional Murrow Awards are presented to small and large radio, television and digital outlets based on 14 geographic regions. Award recipients move on to be judged at the national level. Winners will be announced later this year.

The Radio Television Digital News Association has been honoring outstanding achievements in electronic journalism with the Edward R. Murrow Awards since 1971.

All of us at the Press Club of Southwest Florida congratulate our colleagues at WGCU for their outstanding achievements.