Annisa Karim, chair of the Democratic Party of Collier County, and Russell Tuff, chair of the Collier County Republicans, live just two blocks from one another. Yes, you might consider their neighborhood in Golden Gate City the “power seat” of Collier County. And, apparently a very civil one, based on the mutual respect they demonstrated for one another in their presentations to members and guests of the Press Club of Southwest Florida on March 5, 2020. 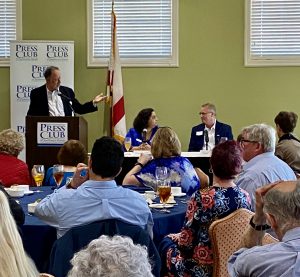 Annisa first became involved in politics while a student at the University of Florida. She describes becoming a U.S. citizen in 1999 as a life-changing experience. While trained and employed as a wildlife ecologist, she believes that politics and policy-making need to be part of our everyday life. Annisa also encourages everyone—Democrats, Republicans, and others—to know their elected officials and those running for office. She urges all citizens to be aware of the local, state, and national issues impacting your life, and to get involved in ways you believe you can make a difference. Annisa says she is involved with local issues, such as food insecurity and accessible housing, because she wants her nieces and nephews to have a better life. She wants good things for our community, including clean air, clean water, access to healthcare, high performing schools, and safe communities. 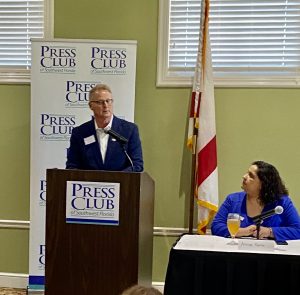 Russell, who grew up in Minnesota, is discouraged by the divisive, anger-filled rhetoric. He notes, “we don’t talk like that (in Minnesota).” He says attitude, language, and facts matter. In his role as chair of Collier County Republicans, he asks, “How do you want the county to be seen around the world?” He believes the future of our environment and the impacts of climate change are important but broad issues that can only be impacted in some ways locally. Russell says he was pleased that after being elected, Florida Governor DeSantis moved from the conservative right to a more central position regarding the environment. As a result, the governor has been a leader in gaining awareness and funding for clean water and healthy ecosystems in our state, according to Russell.

Annisa and Russell discussed that while we live in a “messy democracy,” it is important for citizens to have the courage to throw their hats in the ring to run for office or to participate on a local board. They hope others can help ensure our freedoms as U.S. citizens and take away barriers to participating in government to help everyone become productive citizens.