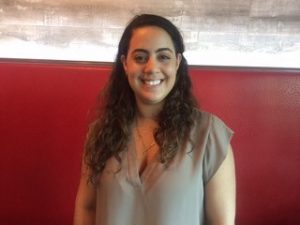 In the spring of 2019, I took a class titled Principles of Journalism. At this point, I had already taken and passed a basic news reporting course and felt that I knew quite a bit about journalism and how to write a good story. There was only one section available in the class—Monday nights from 6:30 pm to 9:20 pm, which seemed incredibly late and long to me. However, the course was required in the journalism program, so I enrolled. What I didn’t know is that Principles of Journalism would soon become one of the most influential classes I have taken in my educational career thus far.

The professor of this course is Rick Brunson, an award-winning journalist and educator with 35 years of professional experience as a reporter, editor and writing coach. He is also a UCF graduate. According to every journalism student I spoke to, Brunson is one of the favorite journalism professors. From the first class, we dived straight into the heart of why the course is important. Brunson explained that we would learn, understand and appreciate why the craft of journalism exists, why it matters and why it is essential to a free society such as ours.

Vital to the class is a subscription to The New York Times because every week we would be tested on what happened in the news the week before, whether it be political, environmental, or social news. Any New York Times article published that week was fair game. As we were all young journalists, Brunson emphasized how important it was that we know what is going on in the world and become accustomed to being a daily news consumer. The tests were ten questions long and very difficult, but as a result of our constant attention to the news, we had really meaningful class discussions about issues and stories that were happening around us.

Brunson’s first principle is titled: “Good Journalists Know the First Amendment and the Role of a Free Press in America.” It is disturbing, he told us, how many Americans are not aware of why the Constitution is so vital to our freedom, specifically the First Amendment. I learned that free people require a free press, because without it, we would not be able to hold the people in power accountable. One of the ways Professor Brunson engrained this principle was through an assigned essay in which we wrote about what the First Amendment and its guaranteed freedoms mean to us, utilizing specific examples in our lives. Another requirement for the essay was to take a selfie in front of the copy of the First Amendment hanging in the lobby of the Nicholson School of Communication.

I felt a little bit silly taking a selfie in the middle of a classroom building, but once my essay was finished, it all made sense. The words in that essay were mine to write and speak freely because of the First Amendment, and my selfie with it is a constant reminder. A few other principles pointed out how courage, curiosity, accuracy, skepticism, and passion make a good journalist. My favorite lesson was about how journalists should remember their humanity because every person we interview has his or her hardships, and we should not forget that in our quest to write a story.

Throughout the semester, we had a guest speaker every time the class met. The reason the class ran so late at night is because the guest speakers dedicated time to educate Brunson’s students after they had already put in a full day. We had the opportunity to speak to the editor-in-chief of The Orlando Sentinel, a video journalist for the Associated Press, a photo and graphics editor for The New York Times, and many other professionals in various media fields. Having conversations with the people who were once students like me and are now professionals in the field I am interested in was incredibly helpful and reassuring.

As a whole, my experience in this class was inspirational. Professor Brunson planned a curriculum centered around the central questions: WHY do people want to be journalists? and WHY are journalists necessary in society? The lectures were not theoretical; the class was not about reciting facts for a test. It was about learning what drives us to be journalists and what tools we need to be successful.

What stood out to me was how I felt after every class. I would walk home feeling electrified by the lessons I had the opportunity to learn every Monday night and, most importantly, confident in my passion for journalism.

Take two minutes to get to know my professor: https://youtu.be/w7pQtkxPBMI

← NPC Scholarship Students’ Updates: October 2019
So You Want to Write? →