From the early 1990s, when what would become the campus of Florida Gulf Coast University (FGCU) was a trackless wilderness that could only be negotiated by 4-wheel drive vehicles or cleared by machete, to today when it’s creating new schools beyond the main campus, Susan Evans has seen it all. 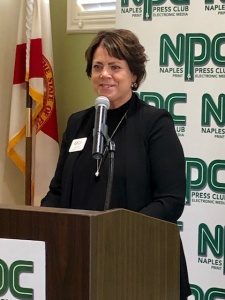 Evans is FGCU’s Vice President and Chief of Staff. On June 6, she shared the university’s history and vision at the monthly Press Club of Southwest Florida luncheon, standing in for President Michael Martin, who was ill.

Evans related that she had worked for seven different presidents since the founding of FGCU and although each had a different style, all were united in one goal: “Let’s build this university, let’s put the foundation in place so that we’re going to create something that’s going to be quality—high quality—and last long after our time here.”

Evans provided NPC members and guests with an overview of the state of FGCU programs and expansion plans, starting with journalism.

Launched in 2011 there are currently 155 enrolled journalism students and alumni have been placed in a wide variety of roles and positions. One graduate, Alex Pena, is now a highly regarded journalist with CBS news. Moreover, in keeping with FGCU’s overall record, 60 to 65 percent of graduates remain in the area.

The program will benefit Mara Liasson, a National Public Radio correspondent and Fox News contributor, who spoke at FGCU’s First Amendment Festival last November. President Martin was so impressed that he offered her the first FGCU Presidential Fellowship, which he conceived immediately after her speech. She will return to FGCU in November, said Evans, as well as the First Amendment Festival.

This year, based on their total enrollment, FGCU succeeded in gaining funding from the Florida legislature, comparable to what is provided to similar universities in the state system.

FGCU lost out on what is called “enrollment growth funding” because enrollment dipped following the 2008 economic downturn just when the school would have become eligible for the program. As a result, since then FGCU has been funded at a rate lower than other Florida schools. Last year FGCU received $12 million in recurring money but this year it was facing significant budget cuts; however, in the final hours of the last legislative day, the Southwest Florida legislative delegation managed to get a $10 million appropriation for the school.

The school is doing better when it comes to performance-based budgeting and will have the highest score since performance-based budgeting began. This year FGCU launched its Water School, an effort to create a comprehensive center for learning and research into water issues, both scientific and policy-related. Evans said the school brings “some very strong scientists” to this new facility. It will be housed in the Emergent Technologies Institute building, which, along with other properties, is being converted to provide laboratory space. FGCU received $9 million this year for that purpose.

Asked about a future medical school or a law school, Evans said that these are difficult to get approved. A school has to go through a “certificate of need” process with the state, to prove that there is a need for these institutions. “I think it will be a very long time, probably not in my lifetime, that there will be a medical school attached,” Evans said. 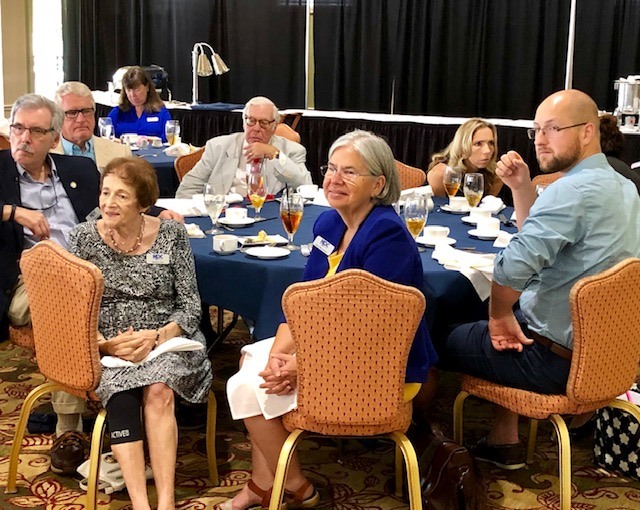 Also unlikely is a performing arts center unless a donor provides a major gift.

Overall, said Evans, FGCU is growing as demonstrated by its significantly improved four-year graduation rate. It has reached the 15,000-student mark, up from the initial 1997 four-year class of 2,584 students. It is now very close to having awarded 40,000 degrees.

“Do you think that has made a difference in this region? I’m pretty sure it has,” she concluded.

← Your Board in Action
A Modern Love Story →