Traditionally, our final luncheon of the season—this year, on June 7—provides the opportunity to introduce our scholarship recipients to members. Scholarship Committee Chair Connie Kindsvater recognized the seven who were able to attend of the 11 we currently support. This turned out to be a record year for the number who applied and the number of new scholarships we granted.  She also congratulated the three who graduated this year and brought one of them, Jaynie Tice, to the podium to express her appreciation to NPC for the networking and the opportunities offered for her personal growth.

Kindsvater also noted that, unlike many organizations who award scholarship funds, we don’t stop there. We assign a mentor to advise each recipient throughout the entire time they receive funding from NPC. She reported that she was a scholarship recipient during her college years, and it was her honor to “pay it forward” by fostering the NPC program.

In the absence of NPC President Julie Pedretti, VP/Administration Carole Greene welcomed the guest speaker, Brett Murphy, who as a young journalist, is “making headlines. Like our scholarship kids, Murphy represents the future of journalism,” Greene said. 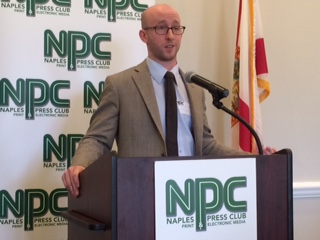 Murphy began his presentation by noting that our scholarship program “speaks volumes about our commitment to journalism in a business environment that is hard to penetrate. These scholarships are invaluable and give students a head start.” 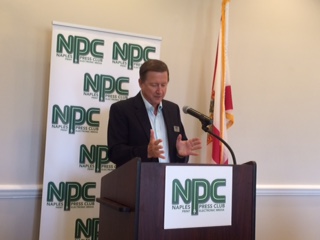 Murphy spoke and took questions about his award-winning series for USA Today. When his report was printed, it was the front-page story on hundreds of Gannet newspapers. He talked about how he had to make readers care about the injustices some California port truck drivers faced and how those injustices impact all of us. “I had a passion,” he said. “I pushed for it and received my employer’s backing.” Sometimes the work on this story—which took 18 months to develop—was sidelined by other huge events he needed to cover, such as Hurricane Irma, numerous wildfires and the Parkland shooting. He also talked about his process in writing the story and the transparency he offered to readers. He showed how he got the information, something he says is imperative to get away from the “fake news” labeling. He also shared the aftermath and changes that occurred in the trucking industry after publication of his piece.

NPC Governor Bob Orr read an edited excerpt from the speech delivered at the March 2018 Honor the Free Press luncheon by Dick Munro, former chairman of Time Inc. It hit hard at the importance of the First Amendment guarantee of freedom of the press, starting off with “It’s not an accident we call it the First Amendment.”

“If freedom of speech is taken away, then dumb and silent we may be led, like sheep to the slaughter.”