The February 1 program at Press Club of Southwest Florida’s monthly luncheon presented some eye-opening facts about opioid abuse and its devastating consequences. Captain Tom Storrar, from the Homeland Security and Organized Crime section of our Collier County Sheriff’s Office, offered a PowerPoint presentation detailing the extent of this situation and the CCSO’s approach to it. 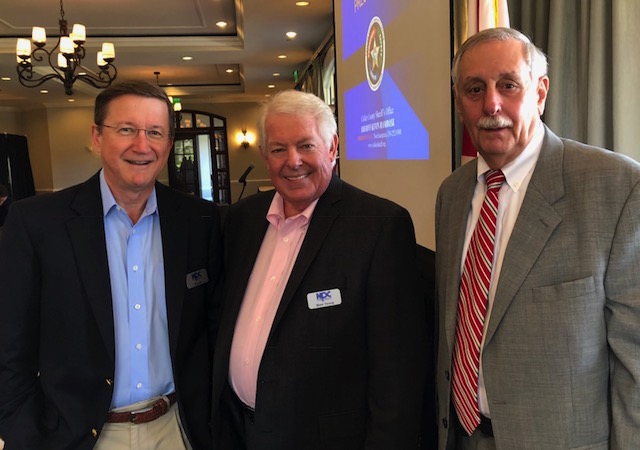 At an astonishing 100-150 fatalities per day, Florida ranked first in 2016 in opioid-related deaths. More than 65,000 in the U.S. lost their lives to opioid overdose last year alone.

Although opiate medications, when used appropriately, treat people with severe pain, some 21 to 29 percent of patients prescribed opioids misuse them. Anywhere from 8 to 12 percent of patients develop opioid use disorder. Of these, 4 to 6 percent transition to heroin. Eighty percent of heroin users first misused prescription opioids.

Captain Storrar reported that standard opioids prescribed for pain come under such names as Oxycodone, Hydrocodone, Codeine and Morphine. Synthetic heroin takes various forms: Fentanyl is 50 to 100 times more potent than Morphine; Carfentanil, typically used to sedate large animals, is 100 to 200 times stronger; Acryl Fentanyl is 100 times stronger than Morphine. These synthetics, typically sold as street drugs, are about the size of a grain of salt. In many cases, two are sufficient to kill. He recalled one person CCSO officers were involved with had five different substances in his body at the time of death. “When you buy street drugs, you never know what dealers used to cut the heroin. That’s why they’re so deadly,” Storrar said.

CCSO has established a map of the county, based on their officers’ experience, of where heroin usage is most likely to be. All deputies carry Narcan—which when used soon enough, may reverse an overdose. Storrar related that a prescription drug monitoring program tracks controlled substance prescriptions. “This program can help us identify people misusing prescribed opioids, who may be at risk for overdose.

“If a person with an opioid abuse problem calls CCSO wanting help, if they will come in and surrender their drugs, we will set them up with a free treatment program at the David Lawrence Center.” However this center has only 30 beds, almost always full, so the county jail has, by default, become the largest mental health facility in Collier County. He also reported that Florida ranks lowest among the 50 states in funding for mental health. He asked us to contact our legislators to urge that they approve a bill currently in the state legislature to provide $53 million in such funding.

Treatment at the David Lawrence Center is voluntary. Withdrawal is painful—requiring 72 hours of intensive detox—and people can leave at any time. They have to be highly motivated to turn around their addiction. “Some turn around, some don’t,” Storrar said. “Our Drug-Free Collier program aimed at abuse education starts in fourth grade. We try to motivate kids not to get into drugs, but if they do, we want to help them.”

Illicit drug traffic is based on supply and demand, Storrar pointed out. If the demand went away, Colombia (currently the largest supplier to Florida) would stop sending heroin and its cousins. In reply to a question about how to decrease this demand, Captain Storrar said: “The kitchen table. Families spending time together, turning off electronics and actually talking with one another.”

Following the formal presentation, the audience trooped outside to watch a 4 ½-year-old black lab who has been trained to alert to certain odors—not drugs, but other contraband such as explosives. Renzo, nose to ground, quickly detected the planted substance, sat in front of it and waited for his handler to offer his reward. The CCSO officer who is Renzo’s handler reported that training took 200 hours and that Renzo stays with him 24/7. “When not on duty, he’s just another kid in my family.”