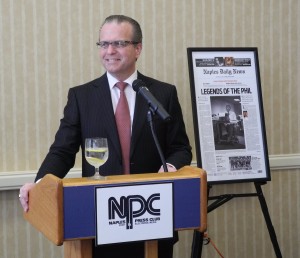 “He’s a person with a theme in his life, and that theme is caring for others,” were the words that Randy Jones, NPC VP/Programs, spoke when he introduced speaker C. Scott Campbell, Market Chief Executive Officer, Physicians Regional Healthcare System, at the February 27, 2014 NPC Luncheon at the Hilton Naples.

Campbell, speaking to a sold-out luncheon meeting, played Pete Seeger’s well-known song, “Turn,Turn, Turn” (written in the late ’50s, an international hit in 1965), and related the words to his personal belief that: Life has times, seasons and purpose. “There is a time for everything,” said Campbell.

Campbell continued, “In my work and in your work is purpose. Each of us is unique. Something within us makes us unique. All of us want to fulfill something in our lives with a purpose.”

Looking at purposeful moments in health care, Campbell pointed out that our first national healthcare plan was Medicare and Medicaid, which came into being in 1964-65. In Naples, Florida, Cleveland Clinic-Naples became a reality in 2001. Five years later, in 2006, Naples-based Health Management Associates (HMA) acquired the 101-bed hospital and renamed it Physicians Regional Hospital-Pine Ridge. A year later, in 2007 Physicians Regional Medical Center-Collier Boulevard opened, a 100-bed hospital and a four-story medical center. Campbell pointed out that the Collier Boulevard area was a region just starting to grow then. Today, 8,000-10,000 more homes are being built in that area. HMA is now gone and Physicians Regional Healthcare System is in its place. In 2014, a new company acquired it–Community Health Systems, also traded on the stock market.

It’s the same purpose, stated Campbell, but a new season. And, most importantly, the focus has not changed. It’s still all about quality and safety, it’s about patient-employee-physician interaction. “CHS has embraced what we’ve done and what we’re doing now,” Campbell said. “We’re not forgetting HMA, but we’re moving ahead, embracing CHS, and I’m 100 percent confident that it is very positive for Naples, Florida.”

Campbell pointed out that the Physicians Regional commitment to this community remains unwavering. “No patient is turned away from our hospital; it’s a matter of integrity and doing the right thing. We wrote off $7 million in uninsured patients’ costs last year.”

“Women in Florida live the longest in the USA,” Campbell said, “and Physicians Regional is recruiting to meet the needs of Collier County’s aging population, focusing on diabetes, robotic surgeries and our comprehensive stroke program, the only one in the community.”

In conclusion, Campbell said that any healthcare reform includes benefits as well as uncertainty. He commented that Physicians Regional doesn’t yet fully understand the Affordable Care Act but will learn to work with it.

During the Q&A period, NPC member Mike Trephan asked if Physicians Regional was ready, in case of a national disaster. Campbell answered, “Yes, we go through drills with the county emergency team to make sure we can handle an emergency or disaster.”