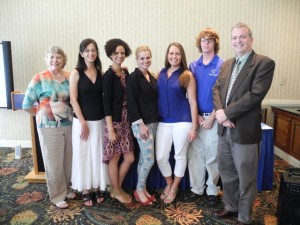 At the April 25th luncheon meeting at the Hilton-Naples, NPC members heard from a panel of four FGCU Journalism students and their professors about Journalism classes, 2013-style.

The first comparison was the “reel-to-reel tapes” for videos in the “old days” to today’s tiny microchip video cards. Friedgen held up the tiny video card and explained that the FGCU Journalism students learn to use it to capture video clips from the field, dump them onto their hard drive, drag them onto a software timeline to edit, arrange, cut, render, etc. Once it’s ready, the completed video can then be sent to the FGCU Eagle News Facebook page, and onto the website, YouTube or anywhere you want to send it, such as an iPhone or iPad.

Rosenblatt commented that it’s “way easier than the old way.”

Asst. Journalism Prof. Cribbs explained to the NPC members that today’s J-Students are totally mobile. They learn to do it all.  Students in his Audio-Visual Journalism Class are able to check out a “Video Kit” that has everything needed to gather information in the field. In the kit, costing about $1,000, is a 1.5 lb. high-quality camera with a flip-out screen with zoom capability and is set up for Wi-Fi and video cards. It has a highly directional microphone and a light ring with different filters, plus a tripod. The three-hour and five-hour power source accessories are very small and rechargeable. Basically, the multimedia kit is lightweight and mobile, and can go anywhere—just what today’s “Modern Multimedia Journalist” needs to do his or her job in the field. Cribbs said, “We’re trying to give our students as much experience as possible, so that when they are out in the field as graduates, they are up to date and know how to do it. We want our students to know what it’s like to be a working multimedia journalist.”

Brown pointed out that she had “no idea” how to create a video until she took Prof. Cribbs’ class, but she found it “very easy to learn how to film the video, add sound and music, and edit it on the timeline software.” She completed her first-ever video for Ronald McDonald House, and then went to YouTube to show it to the NPC members on the large screen.

Journalism Prof. Lyn Millner added, “We started this last year. It’s not just for class; it also has an application outside of the classroom.”

Batlle spoke on the topic, “Who is a journalist?” She covered the concept of “citizen journalists” who do NOT work for a media outlet, and asked the question, “Are they journalists?” She also brought up the “ethics” question. She said that the citizen journalists who focus on ethics and the greater community they serve could probably be considered journalists today. “Journalism is still about connections,” she said. “Feedback helps us refine our stories.”

Asst. Prof. Cribbs stated that the FGCU Journalism classes talk about accuracy all the time because there is always a rush to get something on the air. But, once “credibility” is gone, it’s gone and you can’t get it back!” He said that it is a fine line between preparing the students for the challenges and facing them. Currently, there are over 100 Journalism major students in the now two-year-old program at FGCU.

The students passed out copies of the current issue of Eagle News which was filled with large photos with a QR Code imbedded in each one. For the “rest of the story,” readers scan the codes with QR Scan Apps on their Smart Phones, which takes them to the Eagles News website. Rosenblatt said that Tom Hanson of the Naples Daily News helped the FGCU J-students develop that technology.

← Author Notes
Your Board in Action →