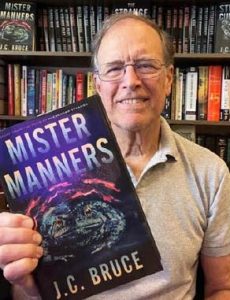 Mister Manners is a 373-page novel available as a trade paperback, hardcover, ebook and audiobook published by Tropic Press. It is the fifth in the series of Strange Files mysteries, which recount the adventures of America’s only full-time reporter of news of the weird, Alexander Strange. The book previously was honored in the Royal Palm Literary Awards where it also earned the Silver Medal. Another book in the series, Strange Currents, won the Gold Medal.

“We are proud to announce this year’s winners who truly embody the excellence this award was created to celebrate. Their works are representative of creative storytelling, bold concepts, and innovative ideas which make the President’s Book Awards so well respected by librarians and those in the publishing industry. We salute all our winners for their fine work.” says FAPA’s Immediate Past President, Renee Garrison.

J.C. is an award winning journalist and author residing in Naples. He has been an editor and reporter at numerous newspapers including the Naples Daily News, Miami Herald, the St. Petersburg Times, the Dayton Daily News and the Austin American-Statesman. He is a former Pulitzer Prize and National Journalism Awards juror and is a member of numerous literary and journalist organizations including International Thriller Writers, Mystery Writers of America, the Society of Professional Journalists and the Press Club of Southwest Florida.