Please join us in congratulating Glenn Miller for winning two top awards from the Florida Press Association earlier this month. 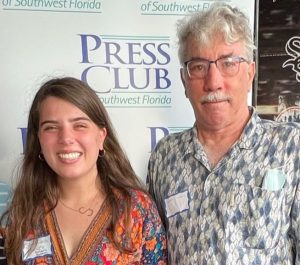 Glenn’s newspaper career spans almost 40 years, where he mostly covered sports but says he also “wrote about just about everything from theater to politics to veterans to the weather and hundreds of history stories.” He spent 25 years with the Fort Myers News-Press.

He has also been active with the Southwest Florida Historical Society, serving as president from 2016 to 2020.

Glenn has written a novel, “Grabmore,” which he calls a “comic crime caper.” His 85,000-word sequel, “Grabmore, And More,” has been submitted to Martin Sisters Publishing, which published his first novel.

You can follow Glenn via his blog at glennmillerwrites.wordpress.com.

The Press Club of Southwest Florida also offers congratulations to the editors of Florida Weekly, which has three editions in Southwest Florida – Naples, Bonita Springs, and Fort Myers – for being named the best weekly newspaper in the state by the Florida Press Association by garnering 21 journalism prizes. This is the seventh time Florida Weekly has won the state’s top award. Congrats!