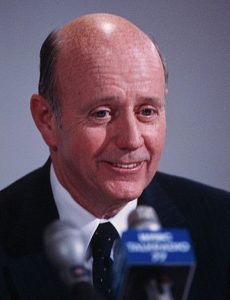 Longtime press club board member Phil Beuth is mourning the death of Tom Murphy, whom he describes as “my close friend, mentor, and partner.”

Phil was the first person Tom hired when he started Capital Cities Communications in 1955. At the time, the company owned one small UHF TV station in Albany, NY, and Phil was hired as film editor for $60 a week.

The two were colleagues for 42 years, as Phil worked his way up through the ranks to help CapCities grow and live up to its reputation for ethical management, community service, and entrepreneurial spirit. Warren Buffet once called CapCities “the gold standard for ethical corporate behavior.”

In 1985, CapCities stunned Wall Street when it acquired the much larger American Broadcasting Company for $3.5 billion. In other words, “the minnow swallowed the whale.” And the rest is history, especially for Phil who was named president of morning and late night entertainment for the network.

ABC’s flagship show, “Good Morning America,” was under Phil’s leadership for 11 years, and he and his team restructured the show, resulting in being named the top morning broadcast show and winning an Emmy.

Phil and Tom retired from CapCities in 1995 when Disney bought ABC from them for $19 billion.

“Tom was unique, and our relationship was as well,” Phil says, as he recalls their lifelong friendship and professional accomplishments in broadcasting.