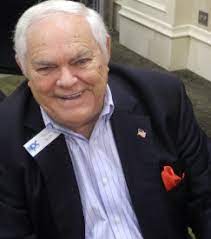 Celebratory wishes have been winging their way from press club members to our longtime board member, Phil Beuth, as he celebrates his 90th birthday.

One of the most beloved members of the club, Phil has been giving generously of his time, his leadership skills, his passion for freedom of the press, and his dedication to the club’s Scholarship Program for many years.

It is because of Phil’s commitment to the Scholarship Program that his birthday celebratory wishes this week are also overflowing with wishes of gratitude.

Phil served as Chair of the Scholarship Committee for many years, interviewing scholarship applicants and helping to guide them along their journey to become journalists.

Phil also has been a generous philanthropist for the Scholarship Program, donating tens of thousands of dollars through the years.

Connie noted that in the 14 years since Phil got involved in the program, 46 journalism students have been awarded, thanks in great part to Phil’s generous donations.

Connie then played a video honoring Phil, which featured heartfelt quotes of gratitude from numerous past and present scholarship students. The video, which you can view on YouTube by clicking here, was compiled by former scholarship student Oscar Santiago Torres, who is the digital content producer for the Naples Daily News and other USA TODAY newspapers.

Phil’s successful career in the news media is a shining example to all journalists.

Working his way from the bottom as a film director, to a producer-director of news, to a general manager and eventually to a president’s position, Phil retired from Capital Cities in 1986 when Disney bought ABC from them.

Phil was named New York State Broadcasters Association’s “Broadcaster of the Year” in 1979.

Phil, you are an inspiration to us all, and on the occasion of your 90th birthday, we send you our love and gratitude. Thank you for everything you do for our club, but most of all, thank you for your friendship.