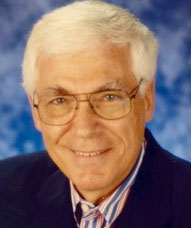 I guess I’ve got to start with my grandfather. He immigrated to the U.S. in 1903 to join his actor step brother in the Yiddish theater in New York. So, those are my first theater genes. His daughter, my mom, was often on stage when a small child was needed in a play. More theater genes. Add some more genes from a well-known Hollywood actor, Harold J. Stone, my second cousin.

Fast forward to Public School 238 in Brooklyn where I was performing on stage during the assembly periods. Fast forward again to Abraham Lincoln High School on the stage crew for our yearly plays and also acting in the plays. By my senior year I was already thinking about getting into broadcasting or becoming a stage manager in the theater.

In my English class we had various extra projects that you could pick to do. One was to interview a CEO or a president of a corporation. My family always watched CBS and the CBS news programs. So, I decided to interview William Paley, the founder of CBS Broadcasting. Not having Google in 1953, I searched the New York City phone directory we had in my home and found the number for CBS. I explained who I was and asked if I could interview Mr. Paley.

It took three more transfers until I got to his secretary. I told her about my English project and asked if I could meet Mr. Paley for an interview. She asked me to wait a moment while she went to ask him if he would see me. Back she came calling me Mr. Banow. No one ever called me Mister Banow. She informed me that he would like to see me, and a date was set.

A week later I’m on the subway heading into New York. CBS was at 485 Madison Avenue. This was the first time I was in a high-rise building in New York. Mr. Paley’s secretary came out and said, “Mr. Banow, I’m sorry to tell you Mr. Paley had to leave suddenly this morning on a business matter and apologized he could not meet you.” It was like I got kicked in my stomach.

Then she told me not to worry, they had set up an interview with Mr. Frank Stanton, the President of CBS Broadcasting. It was like Hanukkah and Christmas all together.

So here I am sitting across from the guy who runs CBS Broadcasting. I spent about 20 minutes throwing all sorts of questions to him about many of the programs I loved to watch and how they’re produced. The interview is over and he thanks me for my interest in broadcasting. So, I thank him just as a thought lights up in my head. I ask him if it would be possible for me to see a live show. Most shows were live then. He said he would set me up to see Mr. Carlton Winkler. He was the guy who managed the backstage shops, the scene shop, costumes, special effects, etc.

I met him a week later. I had a guy here who really could talk about the production of shows. So, this began during my senior year in high school. Some of the studios I visited were in converted movie theaters and some way up in the corner of Grand Central Station, a location I would eventually work in when I started working for CBS.

After high school graduation in June of 1953, I’m at New York University studying cinema. At the end of that first semester, I unexpectedly get a notice that Uncle Sam wants me. I always thought that I was exempted from the draft because I was in college. I really can’t remember what I was told, but I didn’t have to report for another six weeks. I didn’t sit at home till then; I looked for a school offering broadcast studies. I found the RCA Institute in Rockefeller Center. They had a full TV studio to work in. I directed, was on camera, the switcher in the control room, and floor manager.

Before I left for basic training, I called Winkler to say goodbye. He told me to stay in touch with him.

In the military, I was stationed at Fort Dix, Fort Belvoir, and Fort Riley. At Riley I was assigned to the Bedside Network in the post hospital. It was a closed-circuit radio station. So now I’m a disc jockey doing the night shift. I picked the night shift so I could go to a TV class at Kansas State.

Next, I’m shipped off to Seoul, Korea, now with a Broadcast Military Occupation Specialty.

When I got there, I was assigned to the Armed Forces Radio station. After a few months I wound up on a medivac plane back to the states for back surgery. I spent six weeks in therapy and waited for my next assignment. That turned out to be Fort Monmouth in New Jersey.

When I arrived, I had to wait to see what I would be doing. Low and behold, the base had a TV station.  So, because of my Broadcast Military Occupation Specialty, I was assigned to the station. When I was discharged, rather than going back to NYU, I knew I had to look for my first professional TV job. Out went the resumes and in a few weeks, I had my first job at WBZ in Boston.

After I settled in, I let Carlton Winkler know I was back in the states and where I was working. As always, he told me to “stay in touch.” After a year at WBZ I wanted to return to family and New York. When I got home I called him and set up an appointment to see him. The result was a job in the film library shipping out the programs to our affiliates.

Over time I got into the habit of checking the bulletin boards with job listings. One day I saw a listing for a Production Assistant on the Douglas Edwards 15-minute evening news show.

Another Interview to add to my life! I met with the Producer/Director and got the job. His name was Don Hewitt. I think most of you know who he was and that great continuing show on CBS Sunday night that he later created: 60 Minutes. 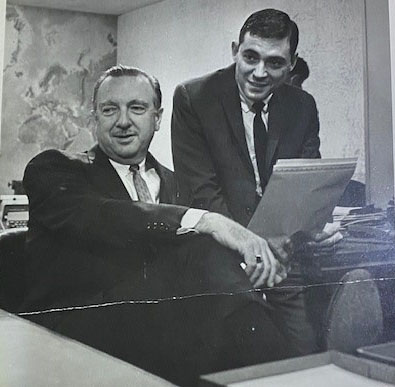 Within a year or so, Edwards was replaced with Walter Cronkite, and the show was increased to a half hour. That started a ten-year run working with Cronkite, first on the Evening News and then on the NASA manned space programs. I rose from Production Assistant to Associate Director, and then Director.

When I think of the most defining moment of my career it was standing in my control room putting on the air the simulations and animations that gave our audiences a picture of what was happening as the astronauts were landing on the moon. After that 33-hour broadcast, my boss Bob Wussler, head of the Special Events Unit, offered thanks to everyone as did I to my crews in studio 41 and at the other remote locations. 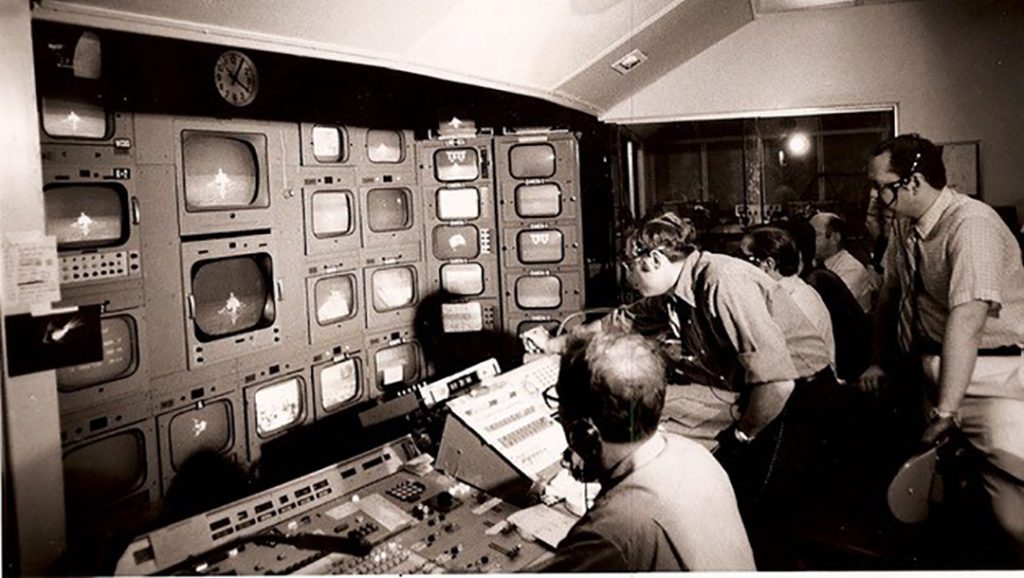 Joel Banow (center, leaning over equipment in control room) during man’s first landing on the moon

I have to say there was one more defining moment in my career. It happened when Wussler, some of our producers, and my wife and I were sitting at a table at the Directors Guild of America awards night in New York. The DGA voting was over and we are waiting for the winners to be announced. Only one would receive the Best Director award. The other four would be recognized for Outstanding Directorial Achievement. The first two were not for me. They read the next name, “for Outstanding Directorial Achievement, Joel Banow, First Landing on the Moon.”

This was the first award for a director in a television news organization.

I’ve known and met many wonderful people throughout my long career in broadcasting, especially my colleagues that I worked with in all of the various broadcast organizations from the military to CBS, NBC, CNBC, and WGCU here in Florida. I especially thank that English teacher for the project he gave me that started a long road to a wonderful broadcasting career.