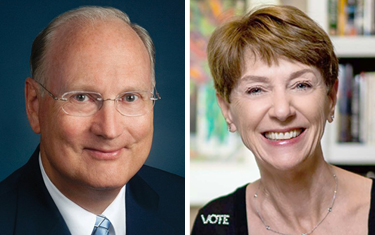 Press Club members Alan Horton and Sandy Parker provided a virtual program about the upcoming election for PRSA members and guests. Horton is a former reporter for the Scripps Howard News Services Washington Bureau and a former editor of the Naples Daily News. Parker is founder/publisher of Sparker’s Soapbox, a blog, website and e-newsletter that facilitates and encourages informed voting.

At the outset of the program, which was held on September 22, Horton shared disturbing information about the lack of local news coverage for the upcoming elections. In the past, newspapers invested heavily in following the various races and candidates, even offering special sections with Q&A type format to help residents make their choices. Horton said he “bemoans the lack of coverage for elections.”

Of particular concern is that previously journalists with newspapers and other news outlets would spend time reviewing and reporting on campaign contributions to candidates. They dug deep and discovered questionable (or illegal) donations we all should know about. This no longer occurs at the same level, if at all.

Now, other social media platforms are trying to fill the void, including Parker’s Sparker’s Soapbox. In her regular blogs and virtual programs, Parker presents fact-based information about various elected positions and the candidates running for office. She also discusses the election process, as well as amendments appearing on ballots.

Horton and Parker offered this advice to consumers looking for information before they head to the polls (or complete their mail-in ballot):
• Act as your own reporter.
• Know your sources.
• It is best to rely on traditional media, such as the major broadcast station news (ABC, CBS, NBC, FOX) and national newspapers (New York Times, Washington Post).
• Look to articles written by professional journalists, who are trained to be fair and objective. Their role is to keep bias out of reporting.
• Access original sources whenever possible.

By the way, they advised, Google is a tool, not a news source.

Bottom line from Horton and Parker? Do your homework around elections. Keep government honest. We all are responsible for those who govern us, from local to national offices.