Anyone following the 2020 elections here in Florida won’t want to miss the debate between candidates for the Florida District 19 Congressional seat, which is being held Monday, September 28, from 8 – 9 p.m. 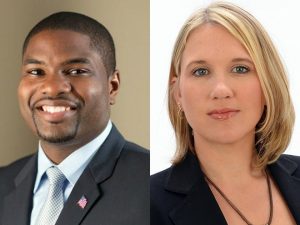 Debating that night will be Democrat Cindy Banyai and Republican Byron Donalds. Moderator will be Julie Glenn, news director of WGCU Public Media.

The debate will be broadcast live from the WGCU-TV studios on the campus of Florida Gulf Coast University as well as aired live on WGCU’s radio station at WGCU-FM. You can also view it live on news-press.com, naplesnews.com, as well as the Facebook pages of these media outlets.

The event is sponsored by WGCU Public Media and the USA TODAY Network-Florida (Naples Daily News and News-Press).

Our thanks to press club board members Rhona Saunders and David Silverberg for being part of a coalition that helped in the early stages of planning the debate.