Bob Orr, VP-Administration, Press Club of Southwest Florida:  Mike Trephan is one of our most colorful and inspiring members. He is a businessman from Harrisburg, PA; the founder of “Honor the Free Press” in Naples; and a proud veteran of the U.S. Marine Corps. Recently, Mike shared a few of his favorite memories from his time in the Marines in the mid to late 1950s. Here are some excerpts. 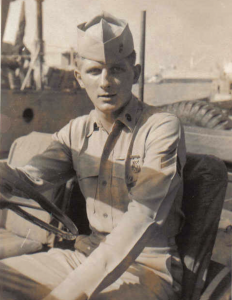 Mike Trephan on Enlisting:  My decision to enter the military came to fruition in the summer of 1955. I was working for the State of Pennsylvania in the Bureau of Publications as a mail clerk. The job was really a dream job for any young guy due to the fact that it got me into all the departments where all the pretty gals worked and hung out. One of my mail deliveries was to military recruiters, and I got friendly with the Marine guys.

A long-time school mate and friend of mine, Jack Stitely, now deceased, agreed to join the Marines. The day when we decided to join up, he called me and said that he had changed his mind and was going into the Air Force. Since I had already told the Marines I was going to join, my decision was made. It was not an easy one since I knew the consequences of my decision could have a greater risk of getting hurt, but it was what I wanted to do, and after all, I saw one too many John Wayne movies to back out now.

Getting into the Marines wasn’t as easy as I thought. Sure, I was in good health, but my eyes were not 20/20, and I didn’t have glasses to correct the vision. You guessed it; I failed the eye test and was rejected. I was devastated. Several days later, hearing that the recruiter I had first seen got transferred, I went back and took the test again and passed. I had memorized the chart. It was done, and I was going to Parris Island.

Mike on Boot Camp:  Several sharp and impressive Marines asked us to line up for a head count. That was the last time I was ever asked to do anything in the Marines. I never heard anyone scream as loud as these guys did and knew that I was now in a new world. In about 30 seconds, I knew I was in for a bad night. We were loaded into buses they called cattle cars, not as comfortable as the old Harrisburg Transit company ones I was used to. After we were checked in and were fed, now about 5:30 a.m., we were run from one site to another trying to carry our gear and doing our best not to displease the drill instructors. But as I found out very soon, there was no hope of this.

For the next four weeks, it was total exhaustion with very little rest or sleep and lots of marching and drilling, running, learning all that can be learned about your rifle and regulations, screaming, and never-ending cleaning the squad bay, (our barracks), and lots and lots of needles. The fifth week things started to come together and a sense of what it was all about started to sink in. Several recruits couldn’t take it and were released in shame from their enlistments by a general discharge, marched to the front gate in their civvies, and then booted out at the gate. This was not the way I was going to get off Parris Island.

Orr:  Mike eventually was stationed at Norfolk, VA, in 1956 as a Private First Class earning $80.00 a month. He was a driver for VIPs, including the Duke of Windsor and Field Marshal Bernard Montgomery of World War II.

Mike on Driving “Monty” Around Norfolk:  At some point, the Field Marshal must have put down his window on the right side and as we approached the front entrance (of the base commander’s home), the sprinklers came on. Well, they did what they were supposed to do, pop up and go on. However, now we were right beside them and the water from one came right into the car knocking off the Field Marshal’s hat and giving him quite a bath as well. Up to this time, he was sort of stiff and proper. I quickly moved the car up out of the way of the sprinklers and took a towel back to give assistance. I thought this would be the end of me. However, he took it with a little humor and said, “Do you have any idea what you have accomplished?”, and then went on to say “Many have tried to do (that) where you succeeded.” I was very concerned and said that I would make a full report to which he said no and that it was finished business and to just press on. This is not the end of the story.

On the way back to (headquarters), a car swung out at rather a fast speed and came along side of our car.  Our vehicle was well displayed with the British front bumper flag and the Field Marshal’s insignia. After several disparaging remarks from this car and the finger to the Field Marshal from the sailor in the back seat, I knew I had to get the identity of these guys. The car sped up and as it passed us by, I took down the make, model and license number. The Field Marshal really seemed unconcerned, took it all in stride, and didn’t say a word.

When we got back to the base I dropped off the Field Marshal and immediately went to my CO (commanding officer) and made a full report of the day’s happenings. Within minutes, the base commander instructed me to take action on what I knew and find that car. I went to (a nearby) pier and after some searching of the lot found the car. I then found their ship and reported back to the commander. I never found out what happened to the sailors and can only guess that they were put on report. I was told that I was not to tell anyone about what happened that day, and that was that.

Mike on Concluding His Active Service:  On January 9, 1959, I was discharged at Camp Lejeune, NC, at the rank of Sergeant. I am sure that there will be other things I remember as time goes by and some things I just don’t want to talk about. What I experienced during my time in the service was self-confidence, loyalty, trust, and a love for others that I can’t explain.

I thank this country for what I was allowed to do. 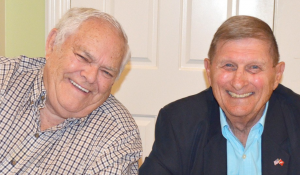 Orr:  Our thanks to Mike for sharing. If you have an interesting story, or simply want to relive some career moments, please consider contributing your memories to SCOOP. Email Mark Young, Communications Chair: mark.young@bellsouth.net.