In addition to tracking nonstop news about coronavirus, I suspect many of you are also finding more time to read.

I also encourage you to share your book reviews with your fellow press club members.  Reviews about books featuring journalists, the media, and other press club related topics are welcome. Please submit them to: Mark.Young@Bellsouth.net. 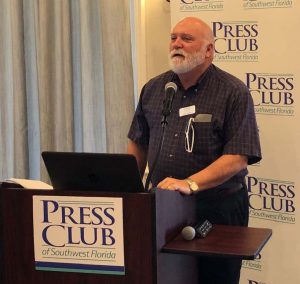 This political thriller has it all: Power plays and manipulation in the inner circles of Washington, DC, including the White House and FBI; lucrative Pentagon contracts and corporate greed; South American drug lords and money laundering schemes on Cayman Island; and a seasoned investigative reporter with an ability to dig deeply into stories that unravel people’s lives. And sex, of course.

The inner workings of the newsroom and how editors and publishers act and react during a journalism crisis made this book an especially good read for those of us who support the First Amendment, free press, and journalists. In the book, publisher Katherine Cunningham says, “When government goes after the sources of stories whose veracity has never been challenged, it chips away at the foundation of democracy and every American’s right to an open and honest government.” And Beck Rikki, the Post-Examiner investigative reporter who faces a court challenge to reveal his sources that would put him in jail, says he “always thought of his profession as a moral calling, keeping government honest ….”

The author, Rick Pullen, joined the Press Club of Southwest Florida in late 2019. A National Press Club member since 1988, he was an investigative reporter in Washington, DC, before becoming a magazine editor and starting up two magazines, including Leader’s Edge, about the commercial insurance industry (big money, big risk, explains Rick).

In 2015, Rick was named to the Folio 100—the 100 most influential people in magazine publishing. He was also a finalist for magazine editor of the year.

Rick’s first novel, Naked Ambition, made Amazon’s bestseller thriller list in 2016, just three weeks after it was published. Two books followed: The Apprentice in 2017 and Naked Truth, a sequel to Naked Ambition, in 2018.

Rick has a new gig. The editors at crimereads.com liked so much a series of interviews he posted on his website with famous thriller novelists, they hired him to write a monthly column for their 900,000 readers. His new column covers how famous thriller and mystery authors struggled to get their first novels published. Rick says the column is for those who want to learn more about their favorite authors and for those who aspire to write a novel and want to learn how successful authors achieved their goals. His first column on novelist Lee Child ran April 2 and is available for free on the crimereads.com website.