NPC members and guests gathered to enjoy lunch and to learn more about “Fake News” on Thursday, April 4, 2019, at the Tiburon Golf Club, Naples. The panel of three experts with a wide range of experience in media had all recently lectured at university classes about fake news and news literacy. 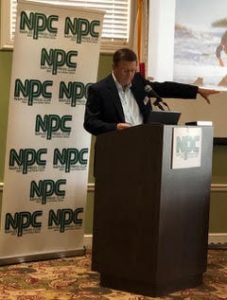 The three panelists answered Orr’s question: what is the definition of fake news?

“There are many first-generation students at FGCU, and journalism is different in different countries. Plus, many of the FGCU students have grown up using only the cellphone and social media; they are steeped in the internet,” Paprocki said. “What is journalism? What is news? What is not journalism? These are the questions that the News Literacy course brings up and discusses. The class helps develop thinking skills, teaches what is opinion writing, what is a news story, what is transparency. The students in the class learn about verifying sources, about bias, about having multiple sources. I found that the students are smarter than I thought they were. And they are getting better and better in recognizing fake news, after learning more about it,” he said. 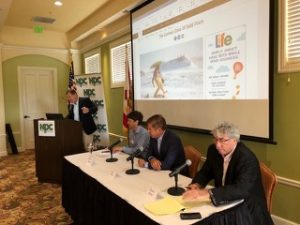 Cifatte teaches Media Topics (Post-Truth Media) at FGCU. “I cover media issues for FGCU students who are not journalism majors,” he said. “We discuss the definition of a ‘fact.’ What is 2 + 2? Your teacher says it’s 5. Your teacher controls your grade, so what, then, is 2 + 2?” Cifatte asks his students, “Why do people believe in what is on the internet? Many people feel that no one takes it seriously. Is it lies? The New Zealand shooter had a camera and posted photos. Now, it’s not just lies, it’s conspiracy. Another form of a lie is one that may contribute to the level of actual truth that then may contribute to people’s behavior.” An example that Cifatte gave is when politicians insist, “I didn’t say that.”

“This generation will need to deal with the sum total of all of this,” said Cifatte. “And, I tell the students, it’s a great idea to be the skeptic in the room! You don’t have to be antagonistic; you could say that you’re not perfect, you may have gotten it wrong. Treat people the way that you would like to be treated in a given situation.”

Miller talked about consequences. “Things like Sandy Hook have consequences. Will it happen at another school? Will my child be shot and killed?” He said that in his FGCU class he imbeds a couple of fake stories in with the real stories, and the students need to determine which are fake. “Everybody’s entitled to their own opinion,” said Miller, “but not to their own facts.” Every president from George Washington on has had issues with the Press over facts being published that they didn’t like—and they called it ‘fake news.’ One example is when an admiral gave the information about the broken code for the WWII Battle of Midway to the Chicago Tribune. Franklin Delano Roosevelt was furious. The New York Times had information on the Cuban Missile Crisis in advance, which upset John F. Kennedy.

Some of the questions and responses during the Q & A:
Q: Would WINK-TV call a lie a lie? Cifatte answered: “We would say that we verify as truth. . . ”

Q: News breaks on Twitter. A cable company jumps on it and repeats it. Are you under pressure to also repeat it? Cifatte replied: “Do we have the right to not report what someone says if we can’t verify it?” Miller told us: “I’ve had editors who say that we have to print it, too, because it’s ‘out there.’”

Q: Why can’t the media not publish a shooter’s name or face? That’s a law in New Zealand.” Orr’s answer: “I feel there was too much about the shooter in the media. Do we need to have that much coverage out there? I would vote for less coverage. Instead, raise the question, ‘What led to this?’”

Q: What are the three most important words in journalism? Miller replied: “1. Accuracy. 2. Accuracy. 3. Accuracy.”

Julie Pedretti, president of the Press Club of Southwest Florida, gave one-year honorary memberships to all three panelists, and invited them to come back to some of our other events.

← Kickoff to Apollo 50 Space Festival Photos
Your Board in Action →